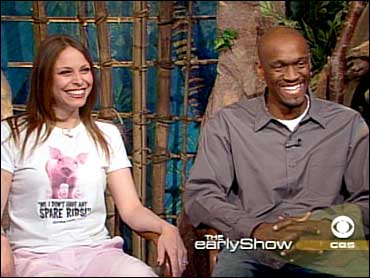 There are only three episodes of "Survivor: All-Stars" left, and six contestants (three men and three women) remain. With such high stakes, the contestants have to play smarter.

Thursday night's reward challenge is in the hands of - or perhaps the stomachs of - the Survivors' loved ones from home, who got a free trip to eat the "delicacies" of the region.

"I ate a mangrove worm. I passed on the cow brain," Kimmi Kappenberg from "Survivor: Outback" told The Early Show co-anchor Harry Smith. Along with Gervase Peterson from "Survivor: Borneo," she said she wished that members of her family had to eat for her when she played the game.

Kimmi and Gervase both visited the show to handicap the game. In the last episode of "Survivor: All-Star," wounded egos spurred some cranky exchanges at camp - specifically from Alicia, who was named the tribe member who thinks she's smart, but isn't.

Having had a big fight of her own with Alicia while at the Outback, Kimmi says, "She dug her own grave last night. Shii Ann went and talked to her and approached her, and she said our alliance has been made and you're not included in it."

With their numbers dwindling, the "Survivors" voted to keep people who are easiest to live with, and after Shii Ann – the last original Mogo Mogo – won a key immunity challenge, the tribe mates sent Alicia and her confrontational attitude packing.

Tongue-in-cheek, Gervase says had he been in the "All-Star" game, Boston Rob's domination would have been over long time ago.

Kimmi notes, "You see a softer side of Rob this time, definitely. The ironic thing is, I find it very funny that Rob is outwitting people. To be outwitted by Rob? Who knew?"

Gervase quickly points out, "What girl would not be in love with Rob right now, and what guy wouldn't want to be Rob right now? He's dominating everything. He is the ultimate alpha male right now."

As for Shii Ann, Gervase says she is done. "The "Survivor" gods smiled down upon Shii Ann for one day. That's it." Kimmi gives her more credit saying, "She's not going to be the final four, but she's definitely proved that she's got a little something in her."

The final four according to Gervase are Amber, Rob, Big Tom and Jenna. If Rupert or Big Tom wants to turn the tables around, they'd better speed things up, Kimmi says. "They definitely had a chance if they all pulled together. They're not doing it and I don't know why. Rupert is a good guy. During the reward challenge, nobody went and busted up his mask or anything. So I think that people like him."

As to who does she think is going to win, Kimmi says Rob, "It depends on how many people's feelings are hurt. If Rob makes it to the final two and if Lex can get over that he's been had by Rob." Gervase thinks Amber will be the one going home with the big prize.