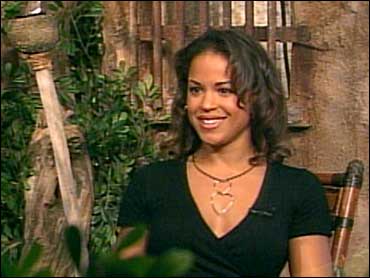 Tempers were short and emotions thinly veiled on Thursday night's episode of "Survivor: All-Stars" after a reward challenge game of truth revealed the players' real opinions of one another.

Wounded egos spurred some cranky exchanges at camp -- specifically from Alicia who was named the tribe member who thinks she's smart, but isn't.

With numbers dwindling, the Survivors are voting to keep people who are easiest to live with, and after Shii Ann – the last original Mogo Mogo – won a key immunity challenge, the tribe mates sent Alicia and her confrontational attitude packing.

On her "morning after" appearance on Friday's The Early Show, Alicia reviewed her reaction to the "truth challenge" with co-anchor Rene Syler. At the end of the challenge, when it was revealed that the tribal consensus was that Alicia thinks she's smarter than she really is, Alicia said she didn't like her fellow players any more.

They say that many a truth is said in jest. So did she mean it when she said she didn't like them any more?

"I did mean it. Absolutely," she replied. "I was on my own, basically, from the beginning of the game. I think it's because I'm an outspoken person. Everybody was comfortable allowing Boston Rob to be in the driver's seat. I wasn't, and that was obvious."

In her opinion, she and Sue Hawk were known as the most outspoken players, which set them apart from the others.

"And when she left the game," Alicia concluded, "I really was on my own, and I knew that. So I just played the hand I was dealt, really."

Alicia said she did try to tone down her outspoken nature.

"I stopped disagreeing with Boston Rob as much as I did. And believe me, there were so many times where I had something that I wanted to say. But I knew it wasn't a good idea, and I just needed to keep my mouth shut for as long as I possibly could."

Was there ever a time during the game when she felt particularly vulnerable?

"You know what? I think I was vulnerable throughout the whole entire game," she said. "And I knew that if we lost a challenge and went into tribal council, I was going to be in trouble. There was no doubt about it. So winning those challenges was really very important. And I have to give respect to Boston Rob, because he was such a physical strength out there."

Alicia explained her reaction to Shii Ann's exuberance at winning the immunity challenge: "When you know your back is against the wall, it makes it a little easier to endure suffering like that. But I told her that, you know, I felt like she had been trying to find a way into that tribe for days, and she didn't want to separate herself. She kept trying to find the chink in the armor. Then, all of a sudden, she wins, and she points, and, like, sticks it right in our face."

So Alicia didn't think that was just because Shii Ann was celebrating a little bit?

"Everybody celebrates," replied Alicia. "But when you point in the people's faces that are trying to separate you out, you're separating yourself even more."

As for the deal Alicia made with Rob, it proved next to worthless in the end. Each had promised never to write the other's name down in a tribal council vote.

Yet, when Rob did write Alicia's name down, he added insult to injury by saying into the camera, "I've been waiting to do this since day three."

Alicia's reaction: "I understand he had been waiting to do that since day three because I'm the only one that would ever go against him or stand up against him. I actually felt good hearing him say my name and say that, because I realized throughout the entire game he couldn't manipulate me, which is why I got voted out. Everybody else followed him but
me… Everybody else is comfortable…allowing him to do the dirty work, and I never was. And he knew that.

"But remember this: I did say I would never write his name down, and I made that promise."

Does she think her temperament did her in?

"I am who I am," she said. "I'm very outspoken, and I'm always going to be that way. It doesn't make me great at 'Survivor,' but it makes me very successful in life."

Also on The Early Show, a viewer named Vicky called from Florida to ask Alicia which was more difficult for her: the physical endurance or the mental stress.

"Well, I think I can deal with anything on a physical level, to tell you the truth. It was the mental stress," Alicia replied. "There are limitations when it comes to money, for me. And it's more moral limitations I have a problem with than the physical limitations. So it was dealing with the people and keeping my cool, which really was the hardest thing for me to do, obviously."

Another caller (Michael from Kentucky) wanted to know why she didn't try to form an alliance with Rupert or one of the other people so she could stay on and get rid of Rob and Amber. Alicia said she had approached Rupert about uniting to oust Rob and Amber, but then she realized Rupert already had formed an alliance with the twosome.

"So I knew I was going to be causing trouble for myself by trying to get him to side with me," she explained. "I had a feeling he was going to go back to Rob, and I would be ousted even quicker. So I kept my cool, or at least tried to."

Here is a summary of Thursday's episode:

The reward challenge was a game of truth -- a sort of Survivor version of "The Newlywed Game" -- in which the players filled out questionnaires with instructions to reveal honest opinions of their competitors. They then went over the questions together and tried to guess the group consensus.

Rupert won reward, earning all players a trip to a five-star Panama restaurant. There were seven dinners ranging from a bowl of camp rice to a full steak dinner. Rupert took the steak, awarding second pick to Boston Rob, followed by Jenna, Amber, Alicia, Big Tom and finally Shii Ann, in effect revealing the four-way alliance that supposedly exists between Rupert, Rob, Jenna and Amber.

Aware of the target on her back, Shii Ann was determined to win immunity, and when the challenge turned out to be a test of will power and also the ability to stand still for long periods of time, knew she had a chance. The Survivors all stood with one arm straight in the air chained to a delicately balanced bucket of water. When the water spilled, the player was out of the game.

After a two-hour stand-off between Rupert and Shii Ann, the gentle giant finally folded leaving Shii Ann shouting for joy and shoving her victory in the other players' faces.

Like others before her, Alicia made the mistake of trusting an old alliance with Boston Rob, which proved none too stable when it came time to vote. A stunned Alicia was voted out of the game, and in her parting words warned Boston Rob that if he makes it to the final two, he won't be getting her vote to take home the million dollars.