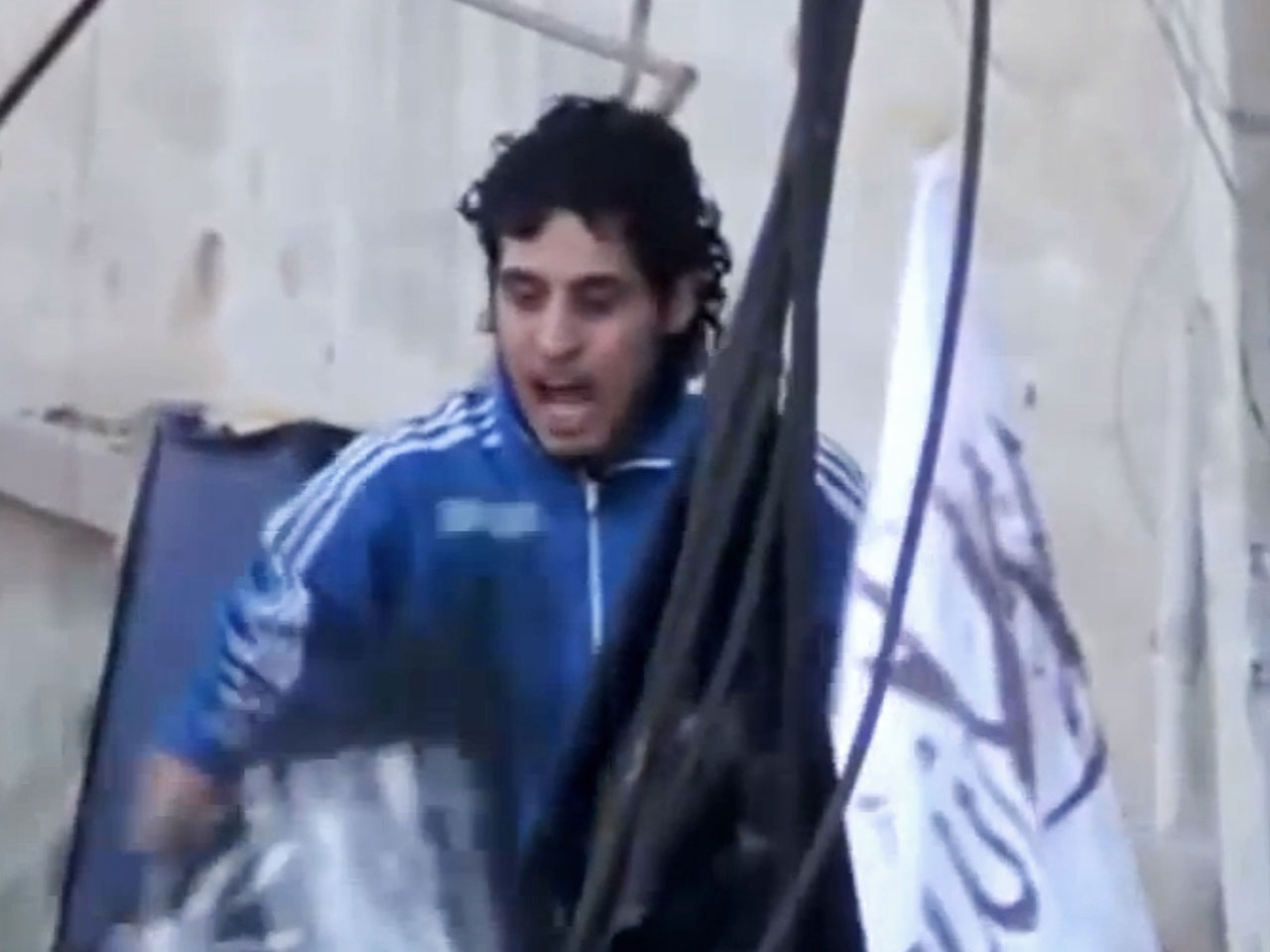 BEIRUT - He began as a local hero on the soccer field, playing for the most popular team of his home city Homs and rising toward national stardom across Syria. But when the uprising against President Bashar Assad began, Abdelbaset Sarout left all of it to lead peaceful protests, rallying thousands to demand Assad leave power.

More than three years later, the former goalkeeper- now an armed fighter - has become a charismatic icon of the Syria's rebellion after surviving 2.5 years under a suffocating military siege of his city. Thin and hollow-eyed from the ordeal, he emerged from the ruins of Homs earlier this month, one of hundreds of rebel fighters evacuated from the city under a cease-fire with government forces, and vowed to continue the fight.

The 22-year-old Sarout's path traces the arc of Syria's conflict. It began in March 2011 as joyous, Arab Spring-inspired street marches aimed at deposing an authoritarian ruler, but when opposition crowds were faced with a bloody government crackdown, many took up arms. The government has denied it is facing dissent, insisting from the start of the crisis that the army is fighting terrorists, who are part of the West and Arab Gulf plot to destroy Syria.

Since then, the conflict has spiraled into an all-out civil war that has laid waste to large parts of the country, killed more than 150,000 and driven more than a third of the population from their homes.

"He is one of the true revolutionaries who never strayed from the goal of this uprising, which is bringing down this regime," said Yisser, an opposition activist and a Homs native who has supported the rebels from Turkey.

"Every step he took, as a fighter, a hero and a soccer player, was for the people and their struggle against a dictator that is that man, Bashar Assad," she said in a telephone interview. She spoke on condition she be identified only by her first name for security reasons.

Despite repeated requests for an interview, The Associated Press could not reach Sarout, who left Homs for rebel-held areas further north after the evacuation. The AP spoke to several opposition activists and friends close to him who said he is unable to talk to foreign media.

Playing for the Homs team Karamah, Sarout elevated himself from poverty to become a hometown celebrity. Tall, with thick curly black hair, he had an upbeat personality that made him a team leader, friends say. Fans in Homs expected him to rise to national prominence after he was picked for the country's youth team in 2007 and 2009.

But days after the first anti-Assad protests erupted in early 2011, Sarout was on the streets. His soccer fame quickly made him a leader in the anti-Assad movement, appearing in protest videos that activists posted online to spread word of the movement.

One shows him standing on a lamppost near Homs' landmark Clock Square, leading tens of thousands in protest songs and chants of "Homs is the mother of the Arab nation. Despite difficulties, we will remain."

At another protest, Sarout, who is a Sunni Muslim like most in the opposition, lifts onto the stage a prominent actress from Syria's minority Alawite sect to chant alongside him in a show of the movement's inclusiveness. The Alawites are generally the strongest supporters of Assad, who belongs to the Shiite offshoot sect.

Homs, Syria's third largest city, was one of the first cities to join the uprising, earning it the nickname of the "capital of the revolution." It was hit by a punishing crackdown, with mass arrests of protesters and artillery barrages and airstrikes on opposition-dominated districts that killed hundreds. In late 2011, bombardment leveled Sarout's house in Homs' impoverished Bayada district, killing his brother and uncle. Days later, Sarout was shot in the leg as he headed for a demonstration.

"I never imagined that any of this would happen to us, or that a guy like Abdelbaset, a poor guy, would become a symbol of the revolution," said a Homs opposition activist who goes by the name of Thaer Khaldiyeh. A childhood friend of Sarout, Khaldiyeh saw him in Homs two weeks before the evacuation.

The government declared Sarout a traitor, banning him from soccer and offering a reward for information leading to his arrest.

Sarout "contributed to destroying his homeland and conspired against his country like other traitors," Gen. Mowaffak Joumaa, the head of Syria's General Sports Federation, told The Associated Press in a recent interview in Damascus.

"He is a terrorist and a killer," he told the AP.

In 2012, as many opposition supporters took up arms and army defectors joined the uprising, Sarout joined the Western-backed rebel Free Syrian Army movement. He rose to command a Homs brigade that bears his name.

For the next two years, government forces constricted the rebel strongholds in and around Homs' historic Old City, trying to starve out the fighters amid relentless bombardment. Rebels and hundreds of trapped civilians survived on meager rations, even grass, moving in tunnels under the Old City.

Throughout the siege, Sarout issued dozens of videos online, vowing to fight to the death. In one, he is seen with more than a dozen other rebels in a house, leading them in singing nationalist songs to keep up spirits as they smile and laugh.

As the siege tightens, he is seen pleading for food and ammunition. In an April video, he stands on a bombed-out street, denouncing the international community and exiled opposition leaders for abandoning Syrians. The videos appear genuine and correspond with AP's reporting about the siege.

"They have all let us down," he said. "All we have left is you, Syrians. God is asking you to rise and avenge the blood of the martyrs."

The Homs ordeal also brought Sarout into close contact with hard-line Islamic rebels who have gained prominence in the movement. In Homs, hard-liners were among the last holdouts, including fighters from al-Qaida's affiliate in the country, the Nusra Front. They and Sarout's more moderate brigade shared the ordeal.

From his early days as a protest leader, Sarout adhered to a nationalist line without Islamist rhetoric. Under the Homs siege, some religious references start to appear in his video speeches. In a speech in February, Sarout talked of the solidarity among the fighters, including Nusra, saying, "the knife is on all of us, all of us are one."

Yisser, the activist, said Sarout had become more religious, "like people do when they are in these horrible situations of war."

But, she said, "he's not an Islamic radical."

The increasing power of Islamic groups has been the latest stage in the trajectory of the Syrian conflict. A pro-opposition columnist for the Arab newspaper Al-Hayat, Hazem al-Amin, warned that if the former soccer player follows that trend, the international community is to blame for failing to back moderate nationalists.

"If Abdelbaset Sarout reaches Aleppo and Idlib and joins the Nusra Front," he wrote, referring to rebel-held areas north of Homs, "we must remember the man was a Homsi fighter for 2.5 years, and before that he was a (revolutionary) singer - and the entire world abandoned him."

On May 8, Sarout and the other fighters were bused from Homs, surrendering the city to Assad in return for their escape. In an activist video of the scene, he flashed a victory sign as he arrived in a rebel-held town farther north. "God protect you, Abdelbaset!" supporters chanted.

He appeared skeletal, his eyes sunken. But he was defiant.

"After we get back on our feet, see our families, get food and nutrition and the heavy weapons we need, we will go back to fight."