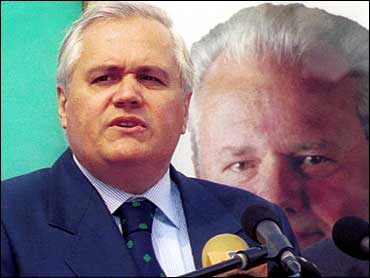 Serbia's former president surrendered to the Yugoslav war crimes tribunal Monday to face charges that he was complicit in a crackdown on ethnic Albanians and possibly to testify in the trial of Slobodan Milosevic.

Within hours of his arrival in the Netherlands, Milan Milutinovic was summoned from the prison in a suburb of The Hague to the international tribunal's courthouse for an hour-long meeting with the chief prosecutor, Carla Del Ponte.

Milutinovic, informed of his rights, agreed to answer questions at a later date, prosecution spokeswoman Florence Hartmann said. She said the possibility of his testifying in the case against Milosevic, the former Yugoslav president, was not raised.

During his presidency of Yugoslavia's larger republic, Milutinovic was mostly a figurehead of Milosevic's regime. He lost what little influence he had when the former Balkans strongman was ousted in October 2000.

But as a former member of Milosevic's inner circle and his wartime defense council, Milutinovic is believed to have potentially incriminating evidence that U.N. prosecutors want aired in court.

Milosevic was extradited to the U.N. court in The Hague in June 2001 and went on trial last February on 66 counts of war crimes in the Balkan conflicts of the 1990s.

His trial, which has repeatedly been interrupted because of his ill health, was delayed for a second week Monday while he recovered from the flu, tribunal officials said. Hearings were to resume Jan. 27.

Milutinovic was charged in the same indictment as Milosevic and three other prominent Yugoslav officials in May 1999 for allegedly leading a Serb crackdown on ethnic Albanians in the southern Serbian province of Kosovo.

He could bargain for a lighter sentence by agreeing to testify against Milosevic or pleading guilty to some of the charges. He is expected to enter a plea within a few days.

The indictment alleges that Yugoslav and Serbian forces under Milutinovic's authority carried out a campaign of violence against Kosovo Albanian civilians to preserve Serbia's control of the province.

Milutinovic has denied he had any role in war crimes in Kosovo, saying he never controlled Serb-led security forces in the province.

Serb troops expelled about 800,000 civilians, looted and destroyed homes, and shelled villages, the indictment says. An appendix lists the sites of massacres where hundreds of civilians were allegedly murdered.

The main question for legal experts watching Milosevic's trial is whether Milutinovic, who took Serbia's presidency in 1997 and left office three weeks ago, will testify against his former boss.

"He certainly has a lot of information," said Judith Armatta of the Coalition for International Justice. "It could be useful and he might want to consider cooperating with the prosecutors."

Armatta said that Milutinovic failed to use his authority to prevent atrocities even if he was not in a position of real power.

Bajram Rexhepi, Kosovo's ethnic Albanian prime minister, said Milutinovic's decision to turn himself in was "better late than never." He insisted that reconciliation in the Balkans would only come when all war crimes suspects were brought to justice.

Milutinovic's most prominent role during his presidency was leading a Serbian delegation during U.S.-sponsored peace talks with rival ethnic Albanian leaders on Kosovo in 1999.

The pro-democracy leadership that succeeded Milosevic allowed Milutinovic to remain Serbian president and refused demands to extradite him until his presidential immunity expired Dec. 29.

Serbia's government has asked The Hague to set Milutinovic free pending the start of his trial because he surrendered voluntarily and because of his poor health. Milutinovic, 60, has undergone heart surgery twice in the past few years.