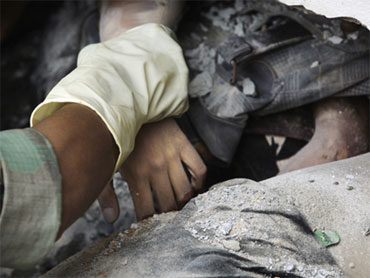 Former Illinois Gov. George Ryan was indicted Wednesday on federal charges of taking payoffs, gifts and vacations in return for government contracts and leases while he was governor and secretary of state.

Ryan, 69, a Republican known worldwide as a leading critic of the death penalty, gradually became the focus of a corruption investigation that began even before his 1998 election as governor. The scandal was a factor in his 2001 decision not to seek a second term.

The investigation initially focused on bribes exchanged for licenses for unqualified truck drivers but was later expanded to a range of alleged bribery and other corruption in the Ryan era.

The indictment alleges that for more than a decade Ryan let his friends wield great influence in state government and profit from his positions as secretary of state and governor. Ryan allegedly allowed some of his friends, who were not state employees, to steer state contracts in return for bribes and gave others insider information that they could profit from, while ignoring complaints of wrongdoing from employees and others.

In return, the indictment alleges, Ryan and his family received illegal cash payments, gifts, vacations and personal services from his friends and associates. The indictment did not list a dollar figure for Ryan but said members of his family got cash loans and gifts totaling $167,000.

"The charged conduct by former Gov. Ryan reflects a disturbing violation of trust," U.S. Attorney Patrick J. Fitzgerald said in a statement. "Ryan is charged with betraying the citizens of Illinois for over a decade on state business, both large and small."

Ryan did not immediately return a telephone call for comment and no one answered the door at his home in Kankakee. Attorney Timothy Rooney, a partner of Ryan defense attorney Dan K. Webb, said there would be no immediate comment but that a statement would be released.

Ryan became the 66th person charged in the investigation; 59 people and his campaign committee have been convicted so far.

Ryan, a hearty, deep-voiced former drug store owner, had served as a state representative, lieutenant governor and secretary of state before his election as governor.

The snowy-haired Ryan was a glad-handing, baby-kissing politician of the old school. His selling point with voters was always that he was good at making deals with other officials, and thus could clear away political obstacles and get results.

Soon after his election as governor, though, federal prosecutors began presenting evidence that bribery was widespread at drivers licensing stations when he was secretary of state.

The federal investigation was launched after six children in one family died in a fiery accident on a Wisconsin expressway involving a trucker who may have bought his drivers license.

Prosecutors traced $170,000 in payoff money to the Citizens for Ryan campaign fund.

Prosecutors eventually won convictions against two of Ryan's top aides, including his chief of staff and the inspector general who was supposed to ferret out misconduct in the secretary of state's office but admitted spending seven years covering up scandals instead.

Ryan declined to seek a second term, and his unpopularity was considered a major reason Republican candidates were routed statewide in the 2002 election.

While his popularity plummeted in his home state, Ryan was winning widespread praise nationally and internationally as a leading critic of capital punishment.

Ryan declared a moratorium on capital punishment in Illinois after it was discovered that 13 wrongfully convicted men had been sent to death row.

"I finally decided that if I was out of office for six months or a year and learned that an innocent man was executed and I didn't do anything about it, that would have been something that would have haunted me for the rest of my life," he said in an Associated Press interview.

In January 2003, just before leaving office, he pardoned four condemned prisoners and commuted the death sentences of 167 others to life in prison.

Critics accused Ryan of using the death penalty issue to deflect the scandal arising from the disclosures of corruption. Supporters nominated him for the Nobel Peace Prize.