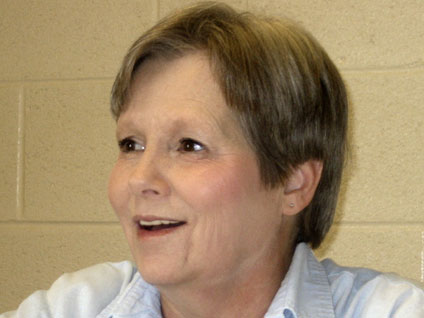 (CBS/WTVF/AP) NASHVILLE, Tenn. - Gaile Owens, a woman who spent 26 years on death row and came within two months of being executed, was freed Friday from prison.

Gaile Owens, 58, was released Friday and greeted by a small group of supporters outside Tennessee's Prison for Women.

Owens walked out of the Tennessee Prison for Women at 9:30 a.m. Friday after spending years on death row for hiring a stranger to kill her husband in 1985 , reports CBS affiliate WTVF.

But, her death sentence was commuted to life in prison last year and last week she  won parole.

Supporters had claimed Owens was a battered wife who didn't use that defense because she didn't want her young sons to know about the physical and sexual abuse.

The first thing she did on leaving the prison was hug one of those sons, Stephen Owens, who is now grown and has children of his own.

"I'm looking forward to leading a quiet, private but productive life," Gaile Owens said in a written statement just before leaving the prison.

Stephen Owens said he was looking forward to spending the rest of the day with his mother.

When he commuted her sentence to life in prison last year, former Gov. Phil Bredesen acknowledged the abuse claims but gave a different reason for his decision to spare her life. He said prosecutors had agreed not to seek the death penalty if Owens pleaded guilty but then put her on trial when her co-defendant wouldn't accept the plea bargain.

At the time she was imprisoned, a life sentence meant serving 30 years. She was eligible to be released now because of good conduct.