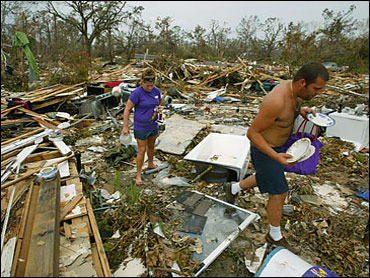 Bond, Miss., isn't a town or a city; it is just a name on a green signpost along the highway that means little to people who don't live here.

But people do live there, back among the pines, in small houses and single-wide trailers. Most are black, and most are poor, and they have been devastated by Hurricane Katrina.

But they have been forgotten. They have no food, no water, no gasoline, no electricity, and little hope of getting any anytime soon.

"I ain't got nothing to eat and I'm hungry," moaned 81-year-old Dorothy Maxwell, who has diabetes. Clutching at the collar of her thin cotton housedress, the old woman moves between despair and anger.

"They got to send us something. We got nothing. People back here are going to starve," she said, her voice picking up an octave.

The Red Cross trucks and the National Guard and the local power trucks roar right by this small enclave scattered off Highway 49, about 25 miles inland from the Gulf of Mexico and smack in the path of Katrina's wrath.

Amid a growing chorus of complaints, the head of the Federal Emergency Management Agency insists aid is getting to hurricane victims and that the government's response is improving.

Making the rounds of the TV morning shows, FEMA director Michael Brown is trying to make it clear the government understands how dire the situation is in New Orleans and elsewhere.

"I understand there are pockets, where people have not gotten the basics," Brown told the Early Show's Hannah Storm. "We have those supplies, we are getting them into the people.

And in the chaos of trying to get aid to the hardest-hit — meaning, for now, the largest number of victims — rural outposts like Bond are lost.

"It's awful down here," said Dot Crawford, whose 3-acre pasture in Star, a town of 500 south of Jackson, was littered with smashed tree limbs. "We don't have anything."

CBS News correspondent Mark Strassmann reports for the Early Show that in Slidell, La., subdivision after subdivision were flattened or flooded by Hurricane Katrina.

Strassmann said police say they suspect hundreds of bodies in neighboring homes. And he told CBSNews.com that with power knocked out in rural areas as well as New Orleans, ice is a prized commodity.

But nothing compares to the search for gas, which seems like a hopeless venture to isolated communities like Slidell, now cut off from New Orleans due to the hurricane's damage of the I-10 bridge.

Brown made it clear that he sees the widespread suffering and that FEMA is mobilizing aid.

"I understand their frustration and I understand these people are suffering, we are doing everything we can to make sure we take care of them," Brown told Storm.

Down the road in Thomasville, the Cox family was cooking all its meals on a barbecue grill. They also had no power, water or phones and no idea when they could expect any of it back.

"We've been learning to do without, which I think is the Lord's plan, since we've all become complacent," Frances Cox said.

For the people of Bond, the nearest store of any kind is a Wal-Mart about 6 miles down the road. But folks say it has only opened a few times, for a few hours, and only two customers at a time are allowed into the sprawling superstore. Purchases are tallied by hand, because there is no electricity.

Employees said the store couldn't stay open longer because there weren't enough people who could make their way to work, residents said.

The beaten, winding roads that stretch from the highway are blocked by tree trunks and gnarled branches. There are overturned mobile homes, power cables that curl like snakes across open street passages and telephone lines that lost all slack, forming giant U's across the roadways that barely allow a car to pass underneath.

To get out, people had to cut their way out. In Maxie, just up the road on the opposite side of Highway 49, James Guinn Sr. and his son, James Jr., spent two days hoisting chainsaws.

"We had to cut 8 miles of fallen trees to clear the road to the highway," said the father.

"If we hadn't cut our way out, we wouldn't have got out," said the son, covered head to toe in wood chips as he stood in the broiling sun. "Cause I ain't seen no county people."

Being able to get out doesn't mean folks here will get anything to eat or any gas for their cars. And gas is more valuable than gold here, and the opportunities to get it are scarce.

Hattiesburg, 30 miles to the north, has some. But the lines to get it have stopped traffic on Highway 49 for 5 miles in either direction. Even if residents had enough gas to reach Hattiesburg, it is unlikely they would have enough to sustain the hours-long wait at the pumps.

Eula Richard, a cafeteria worker at Stone Elementary School near Bond, drove 5 miles to a Chevron station to get water out of the thin hose normally used to fill car radiators.

"We carried it back in jugs," she said, and there's very little left.

She has other worries, including how to get her paycheck and how to cash it when she does. The nearest banks are in Hattiesburg, and they've yet to reopen. She doesn't know when she will be able to work again. The school is closed.

"I haven't heard a word from them," she said.

She isn't able to. Though there is sporadic telephone and cellular service in Hattiesburg, there is none here. But this is low on the list of priorities in Bond.

Outside Dorothy Maxwell's house, a group of women air their complaints, louder and louder, until they're shouting and neighbors step out to see what all the fuss is about.

"They need to be bringing us something," said Shanell Woodward. "I know it's bad everywhere. But they're treating us badly. They shouldn't do us that way. We need water and we need food."

Maxwell said she hadn't eaten in more than a day. She manages her diabetes with diet and medication, which hasn't run out.

"I had some potatoes and a little bit of bread," she said, "but I'm not supposed to eat that."

What to eat today is a different matter. There will be no dinner.

Out on Highway 49, an old man on a bicycle with a gas can in the handlebar basket pedaled toward Hattiesburg.