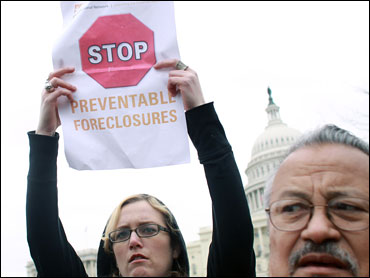 Despite halts on new foreclosures by several major lenders, the number of households threatened with losing their homes rose 30 percent in February from last year's levels, RealtyTrac reported Thursday.

Nationwide, nearly 291,000 homes received at least one foreclosure-related notice last month, up 6 percent from January, according to the Irvine, Calif-based company. While foreclosures are highly concentrated in the Western states and Florida, the problem is spreading to states like Idaho, Illinois and Oregon as the U.S. economy worsens.

"It doesn't bode well," for the embattled U.S. housing market, said Rick Sharga, vice president for marketing at RealtyTrac, a foreclosure listing firm. "At least for the foreseeable future, it's going to continue to be pretty ugly."

The rise in foreclosure filings came despite temporary halts to foreclosures by Fannie Mae and Freddie Mac, and major banks JPMorgan Chase, Morgan Stanley, Citigroup and Bank of America. Those companies pledged to do so in advance of President Barack Obama's plan to stem the foreclosure crisis, which was launched last week.

Two states that contributing to the increase were Florida and New York, where temporary bans on foreclosures ended.

But other states are moving to enact similar measures. On Wednesday the Michigan House approved legislation that would give homeowners facing foreclosure a 90-day reprieve. The legislation now goes to Michigan's Republican-led Senate, where its future is unclear.

While the number of foreclosures continue to soar nationwide, banks have held off listing properties for sale, Sharga said. There were around 700,000 such properties nationwide at the end of last year, making up a "shadow inventory" of unsold homes that could drag the housing crisis out even longer.

"It's going to take us longer than you might anticipate to burn through the inventory of distressed properties," he said.

The results highlight the challenge ahead for Mr. Obama and his economic advisers. The Obama administration is aiming to help up to 9 million borrowers stay in their homes through refinanced mortgages or loans that are modified to lower monthly payments.

The RealtyTrac report said more than 74,000 properties were repossessed by lenders in February as the worst recession in decades, falling home values and stricter lending standards continue to sap the U.S. real estate market.

Nevada, Arizona, California and Florida had the nation's top foreclosure rates. In Nevada, one in every 70 homes received a foreclosure filing, while the number was one every 147 in Arizona. Rounding out the top 10 were Idaho, Michigan, Illinois, Georgia, Oregon and Ohio.

Among metro areas, Las Vegas was first, with one in every 60 housing units receiving a foreclosure filing. It was followed by the Cape Coral-Fort Myers area in Florida and five California metropolitan areas: Stockton, Modesto, Merced, Riverside-San Bernardino and Bakersfield.