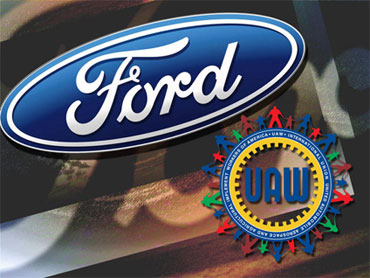 DEARBORN, Mich. - Ford Motor Co. said Tuesday it will add 5,750 jobs and invest $4.8 billion in its U.S. factories as part of a new contract deal with the United Auto Workers union.

The four-year deal was reached early Tuesday after eight straight days of bargaining. UAW leaders were expected to release further details of the contract later Tuesday at a meeting of union leaders in Detroit. The deal is subject to a vote by union members.

John Fleming, Ford vice president of manufacturing, said most of the new hires will be paid a lower wage than Ford's older workers. The agreement is expected to lower Ford's labor costs, which are the highest in the U.S. auto industry.

"The tentative agreement will enable us to improve our overall competitiveness here in the United States," Fleming told reporters at Ford's headquarters in Dearborn.

Fleming would not give details about where the new jobs would go. He said the jobs are in addition to 7,000 new positions that Ford announced earlier this year. The $4.8 billion in investments is also in addition to $1.4 billion previously announced.

Ford likely matched some of the provisions in the General Motors Co. agreement that was reached last month. The GM deal gives workers $5,000 signing bonuses, $1,000 a year for three years to cover inflation and at least $3,500 in profit-sharing this year. GM was able to avoid a pension increase for the first time since 1953, and Ford's terms are expected to match that.

The pact still must be approved by Ford's 41,000 UAW members, who work at 27 plants and other facilities around the country. Voting is expected next week. Approval could be a problem because many expected the company to restore pay raises and other benefits they sacrificed to help Ford through tough financial times starting in 2007.

"UAW members sacrificed when the company was struggling and now will share in Ford's prosperity," UAW Vice President Jimmy Settles said in a statement.

Up next is Chrysler Group LLC, where the talks could be more contentious. The company isn't making as much money as Ford and GM and probably can't afford the same deals.

The UAW talks are watched closely because they set wages for more than 112,000 workers in the auto industry and set the bar for pay at auto parts makers and foreign-owned automakers.