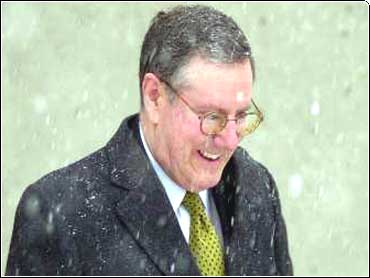 Neither rain nor sleet nor even the first snow storm of the season could keep Steve Forbes from his 78th day of campaigning in Iowa, reports CBS News Correspondent Cynthia Bowers.

Forbes wasn't the only one to brave the weather in Boone, a small town right smack dab in the middle of the state.

"You can send a statement, not a message of protest, but a message of positive principle," he told a group of onlookers Wednesday. Along with his social conservatism, Forbes main campaign thrust includes taxes.

"Everything you do gets taxed, then you look at this federal income tax code - no human being understands the thing," Forbes told the chilly gathering.

One Iowan, Marion Parks, said Thursday that Forbes has won him over.

"I think he's honest for one thing," he said.

His wife Murial added "When you see him on television, he isn't really an attractive person. But when you see him smile and you shake his hand, he's just a great guy."

No question the independently wealthy flat-taxer is looking more at ease on the stump these days.

But if many Iowans regard Forbes as a straight shooter, some of his rivals in the GOP have a different take.

For Forbes, however, the fact that he's a target at all is proof that he's regarded as a serious threat by more prominent Republican rivals. He has spent millions here trying to break through and he knows that if he can't pull off an upset in Iowa, he's unlikely to anywhere else.

His own polling suggests that his deficit has narrowed to the 15-point range, giving him hope of finishing within 10 points of Bush for a strong second place.