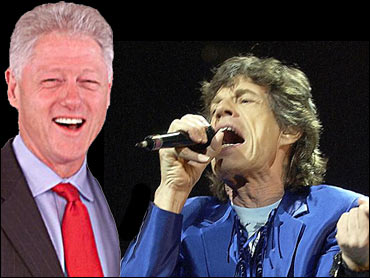 The ex-president, who sported sunglasses and played his sax on "The Arsenio Hall Show" during a 1992 campaign appearance, is not expected to perform with the band.

Instead, he'll make a speech from the stage about the importance of fighting global warming, according to the Natural Resources Defense Council, the nonprofit group staging the gig.

The show was conceived as a way to put "a worldwide spotlight on global warming and the opportunities that exist right now to start fixing the problem," said Jon Coifman, spokesman for NRDC.

About 12,000 fans won tickets to the show in an Internet drawing last month, while others received passes through nationwide radio station giveaways.

The band is currently completing the North American stretch of its Licks World Tour and will launch the international leg later this month starting in Australia.