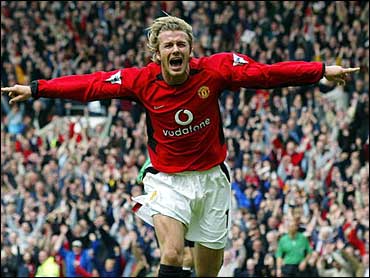 In my experience, politicians talk tough, but when it comes to playing political hardball, watch out for Europe's soccer bosses. These men are Donald Rumsfeld, Mayor Guiliani and General Patton all rolled into one.

But Sir Alex Ferguson, the manager of Manchester United, the world's most successful soccer team, is about to bite off more than he can chew. And you're about to become engulfed in the row. Sir Alex is on the point of selling David Beckham, Britain's greatest soccer player in generations and captain of the England team, to the Spanish Club, Barcelona.

But David Beckham isn't just a soccer player -- he's a superstar. He has become the heart and soul of how Britain likes to perceive itself. A great sportsman who is happily married to the former 'Posh Spice', who by the way calls him "Golden Balls" ... and she should know. Successful, rich, flamboyant, generous and modest. His name and his image doesn't just sell soccer. It sells clothes, soft drinks, cars, fashion ... anything that has the Beckham connection flies out of shops across the world.

Up till now, Beckham and Manchester United have been inseparable. But a while ago, Sir Alex Ferguson had a very public row with his star player, and now, without even informing him, he's all but agreed to sell him to Barcelona. A Spanish club for heaven's sake. Beckham says he wants to stay, and is furious at having his beloved Manchester United try to profit from selling him on like a used car. This is like offering up the Crown Jewels to the highest bidder, and Sir Alex might even end up in the Tower of London.

But what does this have to do with you, our American Football playing cousins? Well, next month two of Europe's best soccer teams will be in the States playing exhibition matches against each other. Those teams are Manchester United ... and Barcelona.