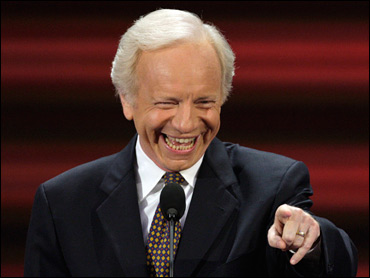 Following a shortened session Monday due to the possible impact of Hurricane Gustav, the Republican National Convention got back to a more traditional schedule Tuesday with a slate of prime-time speakers and a return to the business at hand - nominating John McCain. The message of the day was designed to be about defining and re-introducing the candidate but the attention was focused on who was not in St. Paul - or at least not very visibly.

Since being unveiled as perhaps the biggest political surprise in recent history last Friday, Republicans - especially the party activists gathered here at the Xcel Center - have been chattering about Sarah Palin and little else. And the news media is not far behind in the curiosity category. But since her short speech Friday and a couple of joint appearances with McCain over the weekend, Palin remains a mystery, hidden from public view.

After two days of reports and revelations shook the convention - among them her daughter's pregnancy, her husband's arrest and examinations of her record that turned up evidence counter to her ethics-busting, earmark loathing rhetoric -- and opened up questions of whether the McCain campaign thoroughly vetted the candidate, the campaign and its surrogates hit back. Indeed, they said, they had vetted Palin well, telling CBS News they were well aware of what has been reported on since her selection.

The campaign blamed an overactive media and Democratic opponents for circulating and embellishing the importance of such stories. Former Tennessee Senator Fred Thompson alluded to that sentiment in his speech to the convention Tuesday, saying, "let's be clear, the selection of Governor Palin has the other side and their friends in the media in a state of panic. She is a courageous, successful, reformer, who is not afraid to take on the establishment."

Still, the woman at the center of the chatter remained sequestered Tuesday, presumably behind closed doors working on an acceptance speech that is expected to be delivered Wednesday night. This week Palin cancelled two appearances she had scheduled (although it's important to note that both had been set up before she was selected).

The void was filled with stories and media discussion about the vetting process, about the revelations, and about the strategy and wisdom of McCain's choice - probably not what the campaign had hoped would dominate the first two days of their convention.

For the Republican Party, it was who was most visible - and who was not - that indicated that this is going to be a very different campaign than they are used to. President Bush, who was supposed to be a featured speaker on Monday night, addressed the convention by satellite before the networks broke into their schedules for coverage (although his remarks were replayed when they broke in). Still, spotlighted Tuesday were Thompson and Connecticut Senator Joe Lieberman, the Democratic vice presidential candidate from 2000.

For a night designed to reinforce McCain's personal and political story, having two good friends carry the load is understandable. But Rudy Giuliani is believed to be in line for a prime slot as well this week, meaning that the most emphasized voices at the convention will be the candidate, the running mate and three men known more for their relationships with McCain than their place in the traditional Republican Party.

This is McCain's convention, and it's interesting to see how he's presenting the party he now leads. Whereas Barack Obama featured primary opponent Hillary Clinton, former President Bill Clinton, party legend Ted Kennedy and up-and-comers like Mark Warner, there are no major roles for Republican Party regulars in St. Paul.

The reasons are obvious to anyone paying attention to this campaign. John McCain is not running as a party regular, he's running as John McCain. Everything about his message is pointing that way. The over-riding theme to this convention is his slogan, "Country First." The speakers are there to reinforce that - people like Thompson, a conservative who never seemed comfortable within the corridors of power; Lieberman, a Democrat-turned Independent who is one of McCain's best friends (and who the candidate seriously considered as a running mate); and Giuliani, a crime-fighting, national-security focused mayor who on other issues is a poor fit for the party.

Although there was plenty of red meat for the delegates to devour, especially from Thompson, there were also moments that would have been unthinkable in past GOP conventions. In contrasting Obama with McCain, Lieberman claimed that the Democratic candidate had not walked the talk he gives on the campaign trail. "Contrast that to John McCain's record," Lieberman said. "Or the record of the last Democratic President, Bill Clinton, who stood up to some of those same Democratic interest groups and worked with Republicans to get important things done like welfare reform, free trade agreements, and a balanced budget." It's almost certainly the first time Bill Clinton was favorably referenced at a Republican convention.

Of course, a key part of this presentation is Palin, who was perhaps chosen as much for her outsider status and maverick reputation as for her appeal to women. As a primary focus for this convention, it's Palin who will play perhaps the most pivotal role in St. Paul. And when she does give that acceptance speech, all eyes will be on her.