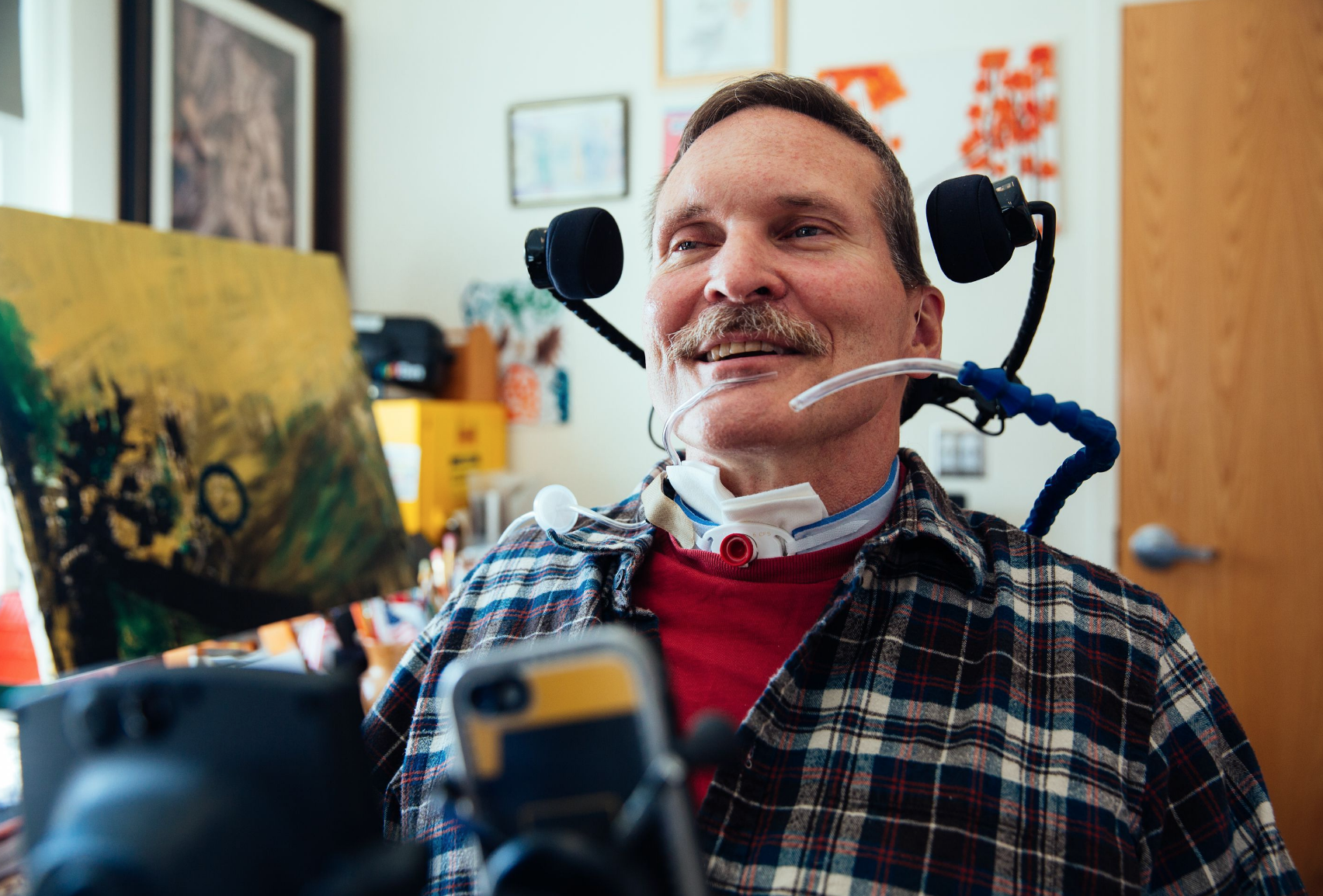 This is part of CNET’s “Tech Enabled” series about the role technology plays in helping the disability community.

The PRC specializes in treating veterans and active-duty service members with traumatic brain injuries. But that isn’t why Swinford’s here.

His 28-year military career ended abruptly on July 18, 2015, after a mountain biking accident resulted in an incomplete fracture of his C2 vertebrae and quadriplegic paralysis. Today, he’s meeting with the PRC’s in-house assistive technology (AT) department for a much-needed tune-up on his chair. “Technology is great when it works, and not so great when it doesn’t work, which frequently is combined when I break it,” Swinford says.

Swinford’s in luck. Smart devices might be relatively new to consumers, but the US Department of Veterans Affairs has long embraced technology to aid veterans. In 2014, 6.6 million people took advantage of VA health care services, and everything from custom wheelchairs to more common gadgets like an Amazon Echo and smart lights have been used to help vets live more independent lives.

According to the Technology-Related Assistance for Individuals With Disabilities Act of 1988, an AT device is “any item, piece of equipment, or product system, whether acquired commercially off the shelf, modified, or customized, that is used to increase, maintain, or improve functional capabilities of individuals with disabilities.”

Before Swinford arrives, Melissa Oliver and Brian Burkhardt give me a tour of their AT lab. Oliver is the program director and a trained occupational therapist; Burkhardt, a rehab engineer, used to build missiles for the Department of Defense. “I used to help blow people up, but now I help fix people up, so I’m fixing my karma,” he says with a chuckle.

The lab is located in a nondescript windowless room within the 22,000-square-foot PRC building. You’d never guess dozens of gadgets are hiding out in here. Yet the space houses everything from DIY smart home products like the Echo, Google Home, Logitech Harmony and Lowe’s Iris to demo versions of professional automation systems like Control4.

It also has a lot of devices designed specifically for the AT community, which are often pricier and older than consumer products.

One such device, the hulking Quartet Simplicity, was built in the 1970s. It has voice control capabilities, but you still have to say “play VCR” if you want to play a DVD. Regardless, it’s reliable -- and some patients prefer simplicity over today’s higher-tech options.

Later on, Swinford tells me he and his wife, Pam, are upgrading their home with a complete Control4 system in a few days -- lights, doors, the television, everything will be automated, along with an Echo for voice control. Not only will this make him more independent, it will also give Pam and Phil’s caregivers more freedom. He’s especially looking forward to being able to turn on the computer without help.

I also speak with Earl Gentile, a veteran who listens to tech podcasts and knows as much about the DIY smart home as I do. Gentile did his research before meeting with the AT team and specifically requested an Insteon Hub. At home, Gentile controls the lights, turns on the TV, listens to music and more. In addition to Insteon, he has a Nest Learning Thermostat, an iPad, an Amazon Echo and an Echo Dot.

The problem, he told me, is the disjointed nature of the smart home -- there are too many competing systems and protocols.

Oliver and Burkhardt aren’t just handing out free Amazon Alexa devices and Control4 systems. Approval for the program begins with a patient’s doctor. Veterans and service members (either in- or outpatient) are only eligible to participate if their doctor believes there’s a medical need.

If a doctor gives the go-ahead, the AT team will work with the patient to find the best possible tech match. The team meets with patients at the VA or uses video conferencing. Gentile, for instance, lives an hour and a half outside of Richmond and checks in with the AT team over video.

There are a number of different clinical categories the AT team treats, including spinal cord injuries, mental health issues and short-term illnesses. As a result, there is no consistent method of care.

They also have to consider factors like voice quality and the progression of a disease when testing different tech options, Oliver said. Many consumer- and AT-specific devices rely on voice control, but that might not work for a patient with Parkinson’s disease. If the patient’s voice worsens throughout the day, the team may install both voice control and a manual switch.

Gentile’s voice quality fluctuates, but he still uses his Alexa products. How? His cousin recorded a bunch of commands for him to use throughout the day, so he’ll queue up the sound file he wants and go from there.

Not every patient is as resourceful or as keen on tech.

There’s also the problem of tech startups that unexpectedly go bust. Burkhardt tells me he had his eye on an Alexa-enabled Bluetooth IR remote called Bluemoo for the lab. But Bluemoo’s online store simply says, “Sorry, this shop is currently unavailable.”

Got tech, now what?

After the AT team finds the right tech for a patient, it’s tasked with scheduling a local contractor to complete the installation. If the device is a consumer product and the installer isn’t familiar with the AT community, Oliver and Burkhardt talk with the installer about what to expect, including questions caregivers might ask.

It can be difficult to find reliable contractors. One of the benefits of a more professional system like Control4, they explain, is its large network of installers. If the system needs maintenance, it’s easier to get someone out to a patient’s home. If they have a DIY setup, it’s up to the patient to troubleshoot after the initial contractor installation.

One of Burkhardt’s goals is to establish more of a working relationship between consumer electronics companies and patients like Swinford and Gentile. “If we can get these companies like Control4 and Amazon really on board with working with this population, and through feedback from these guys [the VA’s AT patients], we could just come up with awesome stuff,” Burkhardt says. “And it could benefit the whole population.”

Control4 seems game. It already works with a dealer, Livewire, which helps with the Hunter Holmes McGuire VA Medical Center in Richmond.

“It’s been an amazing opportunity to participate in this project because it epitomizes our company mission of enriching peoples’ lives,” said Brad Hintze, a marketing executive at Control4.

What if there isn’t a device out there that’s quite right for a patient? That’s when Burkhardt turns to 3D printing and other custom designs. Drawing from his background as an electrical engineer, Burkhardt has filled his office with one-of-a-kind creations made for patients with specific needs.

Phil Swinford has taken advantage of this with an assortment of custom switches all over his chair, as well as a custom joystick made by a student at a recent hackathon. “The labels on the switches are a note to my past as a Bradley Fighting Vehicle infantryman,” he says. They’re nicknamed things like “25 millimeter” and “co-ax [coaxial] machine gun.”

Going the custom route has its own challenges. Some of the connections have come loose on Swinford’s chair, so there’s a good bit of trial and error involved. He said his wife is always “MacGyvering things back together.”

Even though the tech isn’t perfect, Pam Swinford thinks it’s crucial. “When all the other therapies hit a point where you can’t go any further, it’s this [tech] that’s gonna give you independence and give you quality of life,” she says.

But Phil has other things on his mind -- the next thing he wants is a custom Roomba robot vacuum to deliver and pour beer. I like where’s he going with this, but I’m not convinced he’ll get his doctor’s approval.