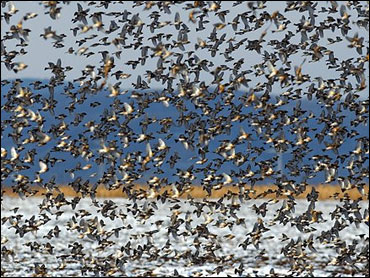 Bird flu appears more likely to wing its away around the globe by plane rather than by migrating birds.

Scientists have been unable to link the spread of the virus to migratory patterns, suggesting that the thousands of wild birds that have died, primarily waterfowl and shore birds, are not primary transmitters of bird flu.

If that holds true, it would suggest that shipments of domestic chickens, ducks and other poultry represent a far greater threat than does the movement of wild birds on the wing.

It also would underscore the need to pursue the virus in poultry farms and markets rather than in wild populations of birds if a possible pandemic is to be checked, U.S. and European experts said.

The H5N1 strain has infected millions of poultry throughout Asia and parts of Europe since 2003. The virus also has killed at least 71 people, many of whom had close contact with poultry.

To date, the virus hasn't been shown to spread from person to person, but many fear that it could mutate into a strain that could, potentially killing millions in a global pandemic.

While the prospect that migrating birds could carry the virus worldwide still worries health authorities, that sort of scenario doesn't appear to be playing out.

"There is more and more evidence building up that wild migratory birds do play some role in spreading the virus, but personally I believe, and others agree, that it's not a major role," said Ward Hagemeijer, a wild bird ecologist with Wetlands International, a conservation group in Wageningen, Netherlands. "If we would assume based on this evidence that wild birds would be a major carrier of the disease we would expect a more dramatic outbreak of the disease all over the world."

Reports this summer and fall of the spread of the H5N1 strain strongly suggested wild birds were carrying the disease outward from Asia as they followed migration patterns that crisscross the Earth. The timing and location of outbreaks in western China, Russia, Romania, Turkey and Croatia seemed to point to wild birds en route to winter grounds.

That put places like Alaska, where birds from the Old and New Worlds gather each summer to create what some call an "international viral transfer center," on alert that the virus could arrive this coming spring. And from there, species like the buff-breasted sandpiper and others that split their time between North and South America could in theory transport the virus farther afield.

Since the early fall, however, there have been only scattered reports of more outbreaks. The disease has been glaringly absent, for example, from western Europe and the Nile delta, where many presumed it would crop up as migrating birds returned to winter roosts.

That suggests the strain has evolved to specifically exploit domestic poultry, whose short lives spent in tight flocks mean a virus has to skip quickly from bird to bird if it is to survive, said Hon Ip, a virologist with the U.S. Geological Survey's National Wildlife Health Center in Madison, Wisconsin.

That also means that while the virus can pass from domestic to wild birds, the latter may not be suited as transmitters of the strain — at least so far.

"By the timing of the spread and the pattern of outbreaks within a country and between countries, it does not make sense relative to a role for migratory birds as a means of spreading the virus," Ip said.

For example, the virus killed thousands of bar-headed geese in May and June at Lake Qinghai in western China. The deaths raised immediate fears that the virus was on the move, jumping among hosts in the wild. In the Aug. 19 issue of the journal Science, scientists wrote that the virus "has the potential to be a global threat."

But Ip and others suggest the lake is not as remote and pristine as initially portrayed, and that poultry raised in the area could have been the source of the flu strain that killed the geese.

"It is still patchy — the pattern of outbreaks — to really make a very definitive link between migratory birds and the disease," said Marco Barbieri, the scientific and technical officer for the United Nations Environmental Program's convention on migratory species in Bonn, Germany.

Experts caution that wild birds cannot be ruled out as future transmitters of the H5N1 strain, which has yet to be detected in North America. Migratory birds, for example, have been clearly implicated in the spread of West Nile virus, which has killed at least 762 people in the U.S. since 2002.

The H5N1 flu strain already is known to be lethal to nearly 60 species of birds; further mutations of the strain could allow it to infect many more. One of the latest victims is the Asian tree sparrow, according to a study published in the December issue of the Journal of Virology.

"The dogma right now is it is the waterfowl, ducks, sandpipers, gulls, plovers, essentially any bird that is water-associated," said A. Townsend Peterson, a University of Kansas professor and curator of the school's Natural History Museum and Biodiversity Research Center. "I will predict that that dogma will eventually fall by the wayside. I will guess that what we will eventually see is that avian influenza is much more widely distributed among birds and that land birds also play a significant role in the picture."

That has made increasing the understanding of the migratory routes followed by birds more important than ever. It also draws attention to how little is still known about the routes.

The conventional maps that show flyways as fat arrows that can span continents and oceans lack the nuance and detail of how birds really move, including when and in what numbers, experts said. The maps also can gloss over how migratory patterns can vary among subspecies.

Traditional methods like bird watching and banding are helping flesh out the maps. And now tracking by satellite or radio, as well as genetic and isotopic sampling, are playing an increased role in sussing out the finer details of where birds travel and when.

In places like Alaska, where millions of individual birds representing more than 200 species arrive each spring, scientists readily confess the situation isn't all clear.

"Fuzzy would be an operative word. We are in the process of defining the Alaskan migration system, and it is remarkably complex," said Kevin Winker, curator of birds and an associate professor at the University of Alaska, Fairbanks.

In the United States, the U.S. Geological Survey, Fish and Wildlife Service and the Agriculture Department plan next year to step up their surveillance of wild flocks of birds.

In the past several weeks, scientists have winnowed down their list of birds they want to keep tabs on, said Dirk Derksen, a biologist with the USGS Alaska Science Center in Anchorage. All spend at least part of the year in Asia.

Early detection would buy time in forestalling the further spread of the virus, a situation no one wants.

"Initially, wild birds are primarily victims. Someday they may become vectors. We don't know how that will play out," Ip said. "What I would like to see is the virus stopped before it gets to America so we don't see the last reel of this film played out in North America."