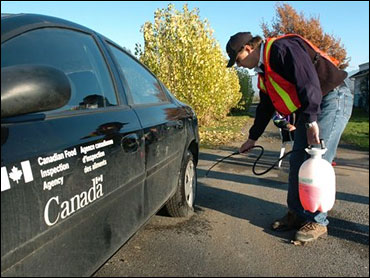 The United States has relaxed a ban on poultry imports from British Columbia initially sparked by the discovery of bird flu in a duck raised in the Canadian province.

The strain of bird flu is now known to be low-pathogenic and poses no threat to human health, unlike the more virulent form in Asia that has killed dozens of people, the Agriculture Department said.

U.S. officials said they banned on Nov. 21 all poultry imports from British Columbia until their Canadian counterparts could identify the virus, later found on a second, nearby farm as well. Several Asian countries that quickly followed the U.S. lead now are expected to relax their bans as well.

In the days after the Nov. 18 discovery of the virus, Canadian officials killed nearly 58,000 ducks and geese on the two farms, located outside Vancouver, said Brian Evans, Canada's chief veterinary officer.

The strain of flu doesn't kill poultry, but can leave them sickened and weak. Proper cooking kills the virus, health officials said.