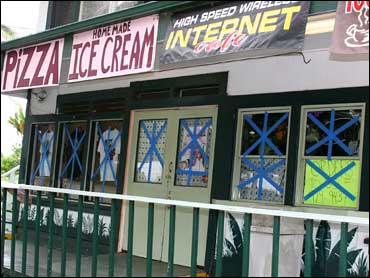 Flossie was downgraded from a hurricane to a tropical storm hours after it sideswiped Hawaii's Big Island and turned its seas into roiling giant surf.

The storm spent most of its wrath at sea, but residents stocked up on supplies and stayed home Tuesday in anticipation of possible flooding and wind damage from the first hurricane to come so close to the islands in 15 years. Schools and businesses across the Big Island were to remain closed Wednesday.

Other Hawaiian islands, including the main island of Oahu, enjoyed tropical breezes and mostly sunny skies, with little impact on tourism or commerce.

Flossie lost its hurricane status as its maximum winds dropped below 74 mph to 70 mph. At the time, it was about 175 miles south-southwest of Hilo, moving west-northwest at about 10 mph.

The Central Pacific Hurricane Center in Honolulu canceled a hurricane watch for the Big Island, although a tropical storm warning remained in effect late Tuesday, meaning the island could experience winds of more than 39 mph.

A flash flood watch for the Big Island was also canceled as the threat of up to 10 inches of rain dissipated. But the Kau region could see 6 to 8 inches of rain, forecasters said.

Flossie was still a hurricane when it buffeted the Big Island on Tuesday, sweeping about 95 miles south of South Point, the southernmost area of the United States.

Gov. Linda Lingle signed an emergency disaster declaration and canceled a trip to the island before the storm hit. The Federal Emergency Management Agency dispatched 20 transportation, aviation, public works and health experts to the island as a precaution. Emergency shelters were opened but attracted only displaced campers and a few stray tourists.

The storm arrived after a 5.4-magnitude earthquake centered 25 miles south of Hilo. The quake Monday night, followed by two dozen aftershocks, caused a small landslide, but authorities said there were no reports of injuries or structural damage.

In the nearby town of Naalehu, small businesses had signs saying they were closed for the day.

While Flossie weakened in the Pacific, a tropical storm watch remained in effect early Wednesday for the southwest coast of Texas and part of Mexico as a tropical depression was expected to strengthen over the Gulf of Mexico. And in the open Atlantic, Tropical Storm Dean cruised far east of the Lesser Antilles.

The Big Island is largely rural, with about 170,000 people, and most live in the west or northeast, not the southern portion expected to be hit hardest. Other islands were expected to get much less wind and rain.