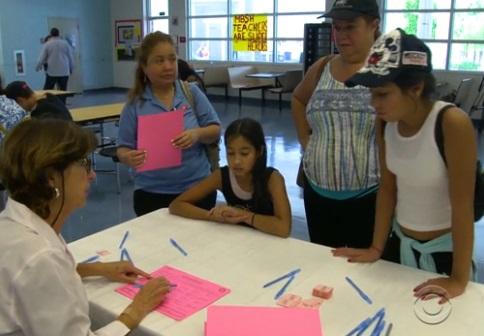 The reopening of school came with more than the usual first-day jitters. With mosquito-spread Zika infections in the area up to 37 now, parents worried about the kids they sent out the door and off to class.

The science of the mosquito-borne virus was part of the first day’s lesson plan at a middle school in Wynwood, CBS News correspondent David Begnaud reported. The students were offered free protective clothing and insect repellent.

Alberto Carvalo, the superintendent of schools in Miami-Dade County, said he saw a lot more children wearing long sleeve shirts than is typical.

Also on Monday, Gov. Rick Scott announced that the Florida Department of Health is allocating another $5 million in funding to Miami-Dade County for Zika preparedness and mosquito control.

Earlier Monday, U.S. Rep. Debbie Wasserman Schultz and Miami Beach Mayor Philip Levine asked for more federal resources to combat Zika’s spread in South Florida, where the first cases of the virus transmitted by mosquito bites on the U.S. mainland have been found in the neighborhoods of South Beach and Wynwood.

The mayor said “we need the federal government to step up.”

President Barack Obama requested an emergency $1.9 billion in February for mosquito control and vaccine development. But lawmakers left Washington for their summer recess without approving the money after Republicans tied the funding to a dispute over abortion.

Katrina Barnard lives outside both zones, but the South Florida mother of two, who’s expecting her third child, has all but quarantined herself and her family.