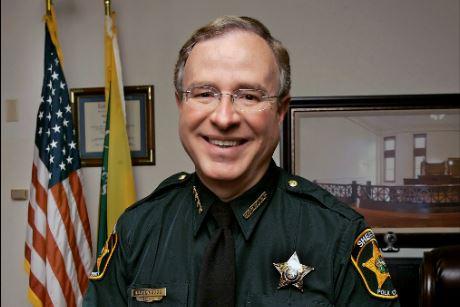 People with active warrants in one Florida county might want to think twice about heading to a shelter for Hurricane Irma.

Polk County Sheriff Grady Judd posted on his official Twitter account Wednesday that deputies will be checking identification at the county's shelters, and anyone with a warrant will be arrested and taken to "the safe and secure shelter called the Polk County Jail."

Judd also posted that sex offenders and sex predators would not be admitted to the shelters.

Sheriff's spokeswoman Carrie Horstman says they're trying to educate the public before the storm hits this weekend. She says they're hoping people with warrants will turn themselves and use the next few days to deal with their legal issues.

The Orlando Sentinel reports that Judd is "known for his outspoken comments."

Horstman told the newspaper that sheriff's deputies who conduct identity checks at shelters won't know what an outstanding warrant is for, leaving open the possibility that people wanted for misdemeanor offenses could be arrested as the checks are conducted.

"Officers are legally obligated to take a person into custody if they have a warrant," she told the Sentinel.

The American Civil Liberties Union of Florida told the Sentinel that most people with outstanding warrants in the state are wanted on minor charges, and the group urged Sheriff Judd to, "focus on preparing for Irma, not burnishing your Joe Arpaio-style 'tough cop' credentials with irresponsible tweets."

Arpaio, then a sheriff in Arizona, was convicted in July of defying a judge's order to stop traffic patrols that targeted immigrants. A federal court ruled in 2016 that Arpaio's policy as sheriff of using traffic stops and workplace raids to find suspected undocumented immigrants constituted racial profiling.

Arpaio was an early supporter of President Donald Trump's White House run, and the president pardoned him at the end of August.