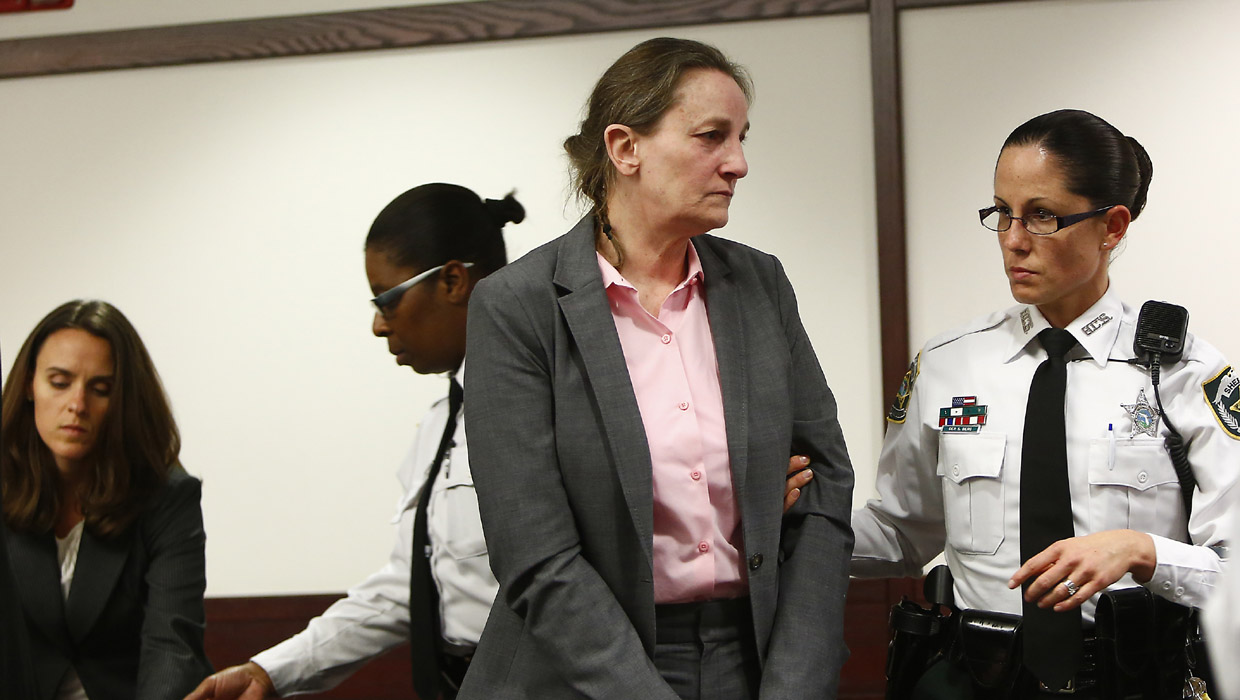 TAMPA, Fla. - Jurors in the murder trial of a mother who fatally shot her two teenage children had to decide between two scenarios: the prosecution's argument that Julie Schenecker knew what she was doing when she aimed a .38-caliber handgun loaded with hollow-point bullets at her children's heads; or the defense's explanation that the former military linguist was legally insane at the time.

After two weeks of lengthy testimony, it took the jury less than two hours to convict the 53-year-old of first-degree murder in the January 2011 killings. She was sentenced soon after to two life terms.

Schenecker, dressed in a gray suit and pink button-down shirt, began to cry after the verdict was announced. But before she was fingerprinted and led away, she turned to the courtroom to utter the only words the public would hear from her.

"I apologize for what happened, what I did," she said, crying. "I take responsibility. I was there. I know. I know I shot my son and daughter. I don't know why but I have time to try to understand that."

In the rambling statement, there was one person Schenecker didn't address specifically or apologize to by name: her ex-husband Parker Schenecker, father of the slain 13-year-old Beau and 16-year-old Calyx.

If Parker Schenecker noticed that, he didn't mention it when he talked to the news media in the courthouse following the trial.

"Today's decision for many reasons gives my family a great relief," he said.

Six expert witnesses for the defense had described Schenecker as a mentally ill woman with bipolar disorder, depression and psychotic episodes.

But prosecutor Jay Pruner spent his closing arguments describing a calculating woman who plotted to buy the gun, waited three days for a background check and detailed her thoughts about the killings in a journal beforehand.

She killed the children, he said, because she was angry at her husband, Parker Schenecker -- a career military man who was deployed in the Middle East when the killings took place. Pruner said Schenecker was angry that her husband had left her in a rehab facility over Thanksgiving and that he wanted to curtail her drinking.

Throughout the trial, Pruner relied on Schenecker's journals as evidence of premeditation.

"I could have done this anytime," Schenecker wrote to her husband. "But luckily you weren't here. I might have taken you out too. That would have been a crying shame."

Pruner added his own opinion: "What does that tell you? It not only tells you about the anger and resentment she has but it tells you, ironically, that Parker Schenecker was probably safer in the Middle East than he was in a bed next to her."

Parker Schenecker sat in the courtroom for all of the testimony, and testified twice - once for the prosecution and once for the defense.

He showed little emotion throughout the trial, except for a few wan smiles when talking about his children while on the witness stand. He sat next to his mother during the trial, while Julie's family sat on the other side of the courtroom, behind the defense table.

The couple, who had been married for 20 years, divorced in 2011 following the shootings.

Both Pruner and defense attorney Jennifer Spradley agreed that Julie Schenecker intended on killing herself, but took too many pills and drank, then passed out before she could shoot herself.

Spradley maintained that Schenecker was suffering from a psychotic episode around the time she bought the gun and shot her children.

"If her thinking was rational and logical, she would have made a different decision," Spradley said during her closing argument. "A healthy Julie Schenecker would have never shot her children."