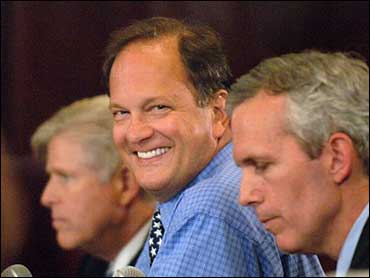 A small plane that landed on Interstate 4 on Friday, creating a spectacle near downtown Orlando that snarled traffic, was piloted by the Reform Party's candidate for governor, a campaign spokeswoman said.

Max Linn, the only person aboard the Cessna 172, was taken to a hospital and expected to be kept overnight, but his injuries were not life-threatening, campaign assistant Nora Wing said.

It wasn't clear why Linn, a former flight instructor, had to land the plane, but Wing said he experienced some kind of engine trouble. "No one's been able to talk directly to Max yet," she said.

The incident closed a lane of the major east-west interstate through central Florida for an hour, according to police dispatch reports. Crews were able to push the plane into the median to clear the roadway.

Both lanes of traffic were reopened after crews were able to push the plane into the median.

Linn, of St. Petersburg, had been headed from Lakeland to Orlando to drop off campaign materials, Wing said.

Campaign spokeswoman Liz McCallum said Linn rarely flies alone and did not know why he had been doing so Friday.

Polls show Linn to be far behind Republican Charlie Crist and Democrat Jim Davis in next month's election to succeed Gov. Jeb Bush. Before running for governor as a third party candidate this year, Linn was known in Florida political circles as a campaigner for term limits.