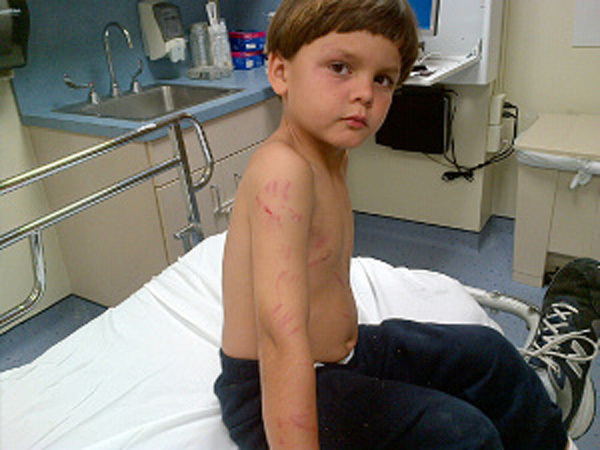 Joey Welch fell into the water at the edge of a boat ramp at the Arthur R. Marshall Loxahatchee National Wildlife Refuge in Boynton Beach on Friday.

"It pulled me in. The alligator put his teeth on my shoe and pulled me in and swam to me and grabbed my arm," he told CBS Miami.

"It felt like I was getting poked, with the sharp end of a (bird's) beak."

His father, Joe Welch, said he desperately tried to bang on the head of the alligator to loosen his locked jaw.

"He didn't flinch. It was as if I was hitting a cinderblock," said Welch.

The boy's dad and bystanders hit and kicked the animal until it released him.

"The guy was yelling at me to pull him up," Welch said of the bystander. "And then he kicked him in the underbelly three or four times."

The youngster was treated for cuts and bruises to his right arm, shoulder and chest. He was given antibiotics and released.

His father had a bruised right hand, caused by punching the alligator.

"We were told by Fish and Wildlife they have 24,000 pounds of pressure per square inch in their jaws," said Welch.

"So the fact he didn't lose his arm or break a bone was truly a miracle of God."

The youngster was back at school at Westminster Academy in Ft. Lauderdale on Monday.

He said he told kindergarten classmates about his brush with a gator. "They say I'm glad you're alive!" said Joey.