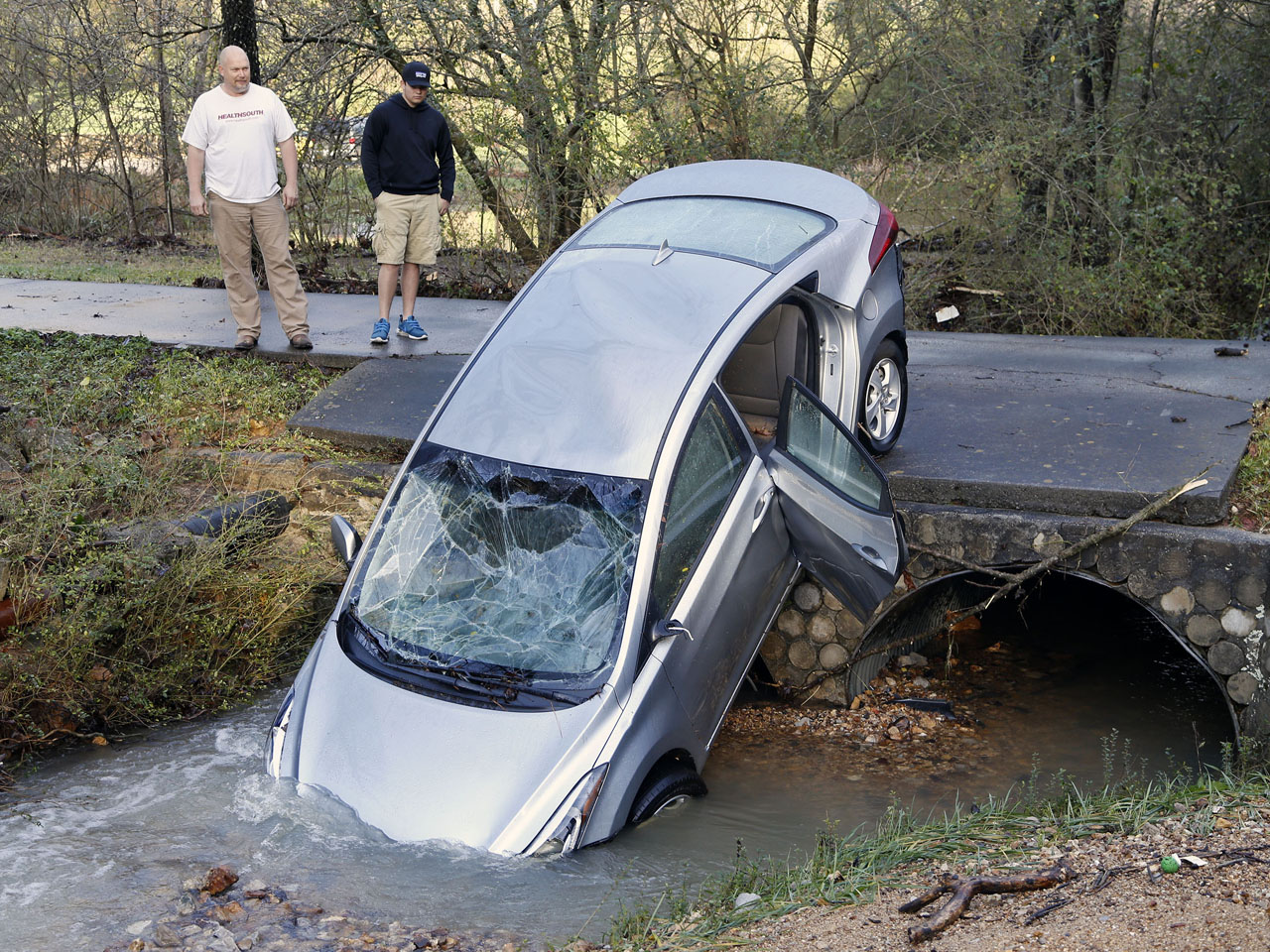 BIRMINGHAM, Ala. - Residents in northern Alabama were warned to be alert for moderate to severe flooding Saturday, a day after a tornado briefly touched down in the state's most populous city but caused only a hint of damage.

The flooding is the result of heavy downpours that have been thrashing the southeastern U.S. since Wednesday, bringing record rainfalls in some areas. The city of Mobile, for example, was walloped with 4 inches of rain Wednesday, smashing the previous record of 2.2 inches set in 1990.

Unseasonably warm weather this week helped stimulate the high winds, tornadoes and torrential precipitation that by Saturday had left at least 18 people dead and dozens of families homeless.

Among the dead were 10 people from Mississippi, including a 7-year-old boy who perished while riding in a car that was swept up and tossed by storm winds.

Six people were killed in Tennessee, including three who were found in a car submerged in a creek, according to the Columbia Police Department. The Tennessee Emergency Management Agency said the victims were a 19-year-old female and two 22-year-old males.

One person died in Arkansas, and dozens of homes were damaged or destroyed.

Alabama Gov. Robert Bentley announced Saturday that he would visit weather-damaged areas in Coffee County. A statement from the governor's office said that about 190 roads across Alabama were closed due to flooding.

Authorities on Saturday recovered the body of a 5-year-old boy who drowned after the car he was riding in was submerged by floodwaters on Friday, said Coffee County Coroner Robert Preachers. The search is ongoing for a 22-year-old man who was also in the car.

The National Weather Service warned residents to avoid driving in areas where flooding was expected. Major flooding is forecast for Big Nance Creek, which runs through the town of Courtland in northern Alabama. The area is about 40 miles east of Huntsville. The creek is not expected to fall below flood stage until early Monday.

A flood warning was also in effect for the Coosa River, swollen by up to 8 inches of rain over the past week, and threatening the city of Gadsden.

The Texas and Oklahoma Panhandles are bracing for what NWS forecasters are calling a "historic blizzard," but the areas under threat are lightly populated.

Between 6 to 15 inches of snow are in the forecast for the region, which includes Amarillo and Lubbock. High winds will drive wind chills as low as 10 below zero and cause low visibility due to blowing and drifting snow.

The blizzard warning for the region takes effect at 6 p.m. Saturday.

A tornado touched down in Birmingham on Friday evening, but damage was limited. The funnel was spotted by witnesses outside the city about 5 p.m. An hour later the National Weather service confirmed that first responders were on the scene along Jefferson Avenue, a working class neighborhood less than 10 miles from downtown Birmingham.

Lt. Sean Edwards, a Birmingham police spokesman, said trees are down and people were trapped inside damaged houses, adding that several people were taken to hospitals for treatment of minor injuries, but further details were not immediately available.

Ruthie Green went door-to-door in a coat and a bicycle helmet to check on neighbors after the storm and swept debris from her front porch as more emergency responders arrived in the neighborhood.

"I been listening to the news all day so I was kind of preparing," Green said. When the tornado warning came up on her iPad, Green said she ran to a closet.

"Then I heard the big roaring, it didn't last more than three minutes," Green said. "I just laid down and just kept praying."