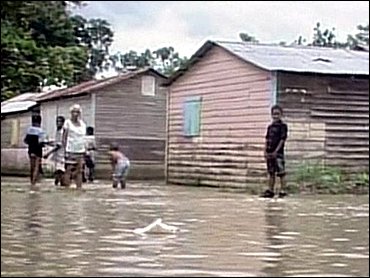 Frantic relatives dug through the mud for loved ones as a makeshift morgue filled up with 100 corpses in rains that devoured a village on the Haitian-Dominican Republic border. Radio stations reported at least 60 were dead on the Haitian side.

The flooding took people by surprise overnight, reports CBS News' Alicia Ortega. "The river just changed its course and just wiped everything away."

Bloated bodies caked with mud were piled in a hospital's makeshift morgue in western Jimani near the Haitian border. A reporter for The Associated Press counted about 100 bodies but overnight, families — carrying wooden and metal coffins — collected about 70 corpses.

Nearly 60 people were reported dead on the Haitian side, according to several radio stations, including Radio Vision 2000 and Radio Metropole. The dead were mostly from towns in southern Haiti, including Fond Parisienne, near the Dominican border and Jimani.

The floods were the deadliest in recent history.

In 1994, Tropical Storm Gordon caused mudslides that buried at least 829 Haitians. More recently, nearly 30 died in September during floods caused by heavy rain in St. Marc, about 45 miles northwest of the capital, Port-au-Prince.

Overnight, stunned townspeople stumbled through the darkness, shocked over the gruesome scenes they had witnessed. Some reached their hands through banks of mud in search of missing relatives.

"We can't find her anywhere," cried Norma Cuevas, 32, as she desperately searched for her 63-year-old mother.

Most homes in the border town were destroyed or heavily damaged; few were left intact.

"They found my daughter. Now I have to see if I have some family left," said Elena Diaz, 42, sobbing in a long line outside the morgue where she went to look for her son-in-law and three grandchildren.

About 300 Dominican soldiers and about 25 ambulances had been sent from the capital of Santo Domingo, about 110 miles away.

The raging water had carried some victims away. Bodies were found up to 6 miles downstream, said Maximo Noves Espinal, an emergency official in the town.

Farmer Jose Altagracia Perez said he was in his house about 3 a.m. Monday when the water began to rise, leaving little time for action.

"The house is all gone. The river came and took everything. Now I don't have anything," said the 60-year-old Altagracia, waiting in line outside the morgue and looking for his 3-year-old son.

In northern San Francisco de Macoris, two men died when they were swept away by an overflowing river, Lora Salcedo said. Another man died when he was caught in strong currents as he fished off the coast.

About 450 homes were flooded throughout the Spanish-speaking Caribbean country, and at least 14 small towns had power outages and toppled phone lines, Lora Salcedo said.

Victims were staying at shelters set up in churches or with family.

Heavy rains persisted through Monday in some areas, leaving small towns and roads flooded west of the Dominican capital of Santo Domingo.

Less serious flooding was reported throughout the country and in neighboring Puerto Rico, claiming at least four lives.

Searchers found the body of a 24-year-old man, who disappeared Sunday in a flooded lagoon in San Juan, Puerto Rico's capital, officials said.

Parts of the island saw up to 8 inches of rain, according to the National Weather Service. And on Monday more than 60 Puerto Ricans were staying in emergency shelters set up in schools.

At sea, the rough weather played a role in the sinking of a Guyanese-registered freighter off the north coast early Monday, leaving one man dead, officials said.

In Antigua and Barbuda, thousands of students stayed home Monday as both public and private schools closed with officials warning of floods following four days of rain.

"Already the ground is saturated and so there is no space now for the water to go," said Patricia Julian, the country's disaster services chief.