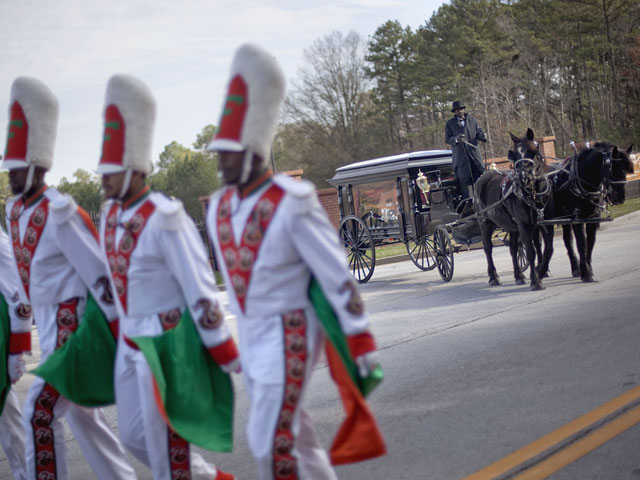 ORLANDO, Fla. - A 911 caller said a Florida A&M University band member had vomit in his mouth in the moments before he died, according to audio of an emergency call released Thursday.

The university also said that it had expelled four students for their roles in the death, but didn't specify what they did.

The unidentified caller told the emergency dispatcher that Robert Champion had stopped breathing and was unresponsive, according to the audio obtained by The Associated Press. Champion had just thrown up, the first caller said before handing the phone to a second man.

"We need an ambulance ASAP," the first caller said. "His eyes are open but he's not responding."

Authorities say hazing played a role in Champion's death, but they have not released any more specifics as they continue to investigate.

The 26-year-old Champion was found unresponsive Nov. 19 on a bus parked outside an Orlando, Fla., hotel after the school's football team lost to a rival.

The dispatcher told the second man to place Champion on his back and clean any vomit from his nose and mouth. But the call was disconnected before the caller could say if he was successful. Before the call ended, the man told the dispatcher he was going to attempt to resuscitate Champion. He also is heard ordering another man to get a defibrillator from inside the hotel.

"He is cold," the second caller said.

The dismissal of the students was acknowledged by FAMU President James Ammons in a memo he sent earlier this week to members of the FAMU Board of Trustees.

Ammons did not specify what the four students did, but said that their dismissals were connected to Champion's death. He also told trustees that a group of students protested his decision to shutter the Marching 100 while the investigation continues.

FAMU's band director, Julian White was fired as part of the fallout over Champion's death. The school says it will conduct an independent review, and the group that oversees the public university system in Florida says it also will carry out an investigation.

The owner of the company that transported Florida A&M University band members told the AP Thursday that the driver did not hear or see any commotion on the bus before Champion collapsed.

Ray Land, president of Fabulous Coach Lines, said his company has transported the "Marching 100" to many games and never had any incidents of hazing or inappropriate conduct on the buses.

The driver was helping students unload their instruments outside the hotel when Champion collapsed, Land said.

He said the driver is shaken up over what occurred and that their experience with the band has always been positive.