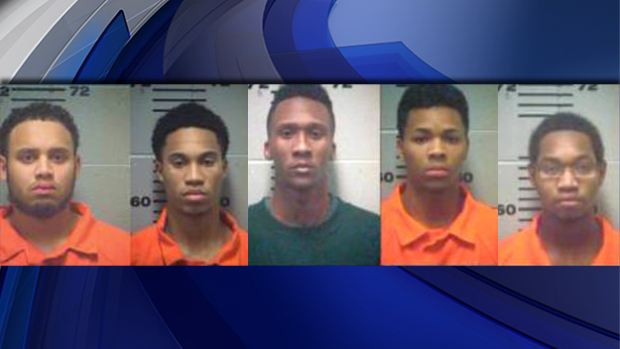 The alleged incident occurred last Tuesday, according to a statement from the university president. The five suspects, all 18 years old, are Jahmel Latimer, Darius Singleton, Garret Collick, Noah Williams and Tremaine Scott, a spokesperson told a local paper, The Record.

They are each being held on $200,000 bail each, according to the newspaper. It is unknown if the teens have lawyers

The university president, Kathleen Waldron, also told students and faculty that the students have been barred from campus.

"I am angry and dismayed that this crime was committed on our campus and allegedly by students," Waldron said. "My deepest concern is for the victim of this criminal act who has courageously stepped forward to take legal action and seek justice. No expression of anger or sadness on my part can alleviate the harm done to the victim and my heart goes out to her and her family."

In recent months, several universities have come under fire for their handling of sexual assault cases. Five were arrested in an alleged sexual assault at Ramapo College in Mahwah, N.J., according to CBS New York and the University of Virginia suspended fraternity activities to investigate rape allegations on campus.

William Paterson students voiced their concerns after hearing about the arrests.

"Unfortunately it happens, it's not just a problem on this campus," Jayson Kuehm told the station.

The university president stressed that the school will continue to provide a safe environment for all its students.

"We are committed to ensuring that William Paterson University will always be a place where students feel safe and sound. This commitment extends from our classrooms to our residence halls and to everywhere on our campus," Waldron said in her statement.