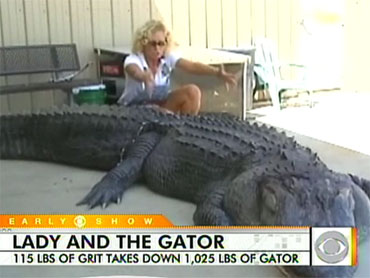 Mary Ellen Mara-Christian is only five feet, five inches tall, weighing in at 115 pounds. She's looks small, but this week she proved she can take on a lot.

How did she do it?

In an exclusive interview on "The Early Show on Saturday Morning," Mara-Christian explained she was out on a boat on Lake Moultrie with her husband and a few friends when she hooked the alligator with her heavy-duty fishing pole.

Mara-Christian said they had no idea how big the gator was. She said others estimated the gator was 10 feet long; it turned out to be three feet longer.

But how did they reel him in?

"It was the tug-of-war of a lifetime," he said.

Mara-Christian said other friends also assisted in the effort.

"What was really neat was the experience itself was that there was three of us, we all had a task at hand, we were all holding on to the ropes, she said. "I mean, that's like a truck under the water. And you're just holding on with all your might."

Mara-Christian added, "So really, I know I had the (hunting) tag, but you can't possibly do that by yourself."

Nguyen remarked, "You've got a lot of alligator meat to figure out what to do with now."