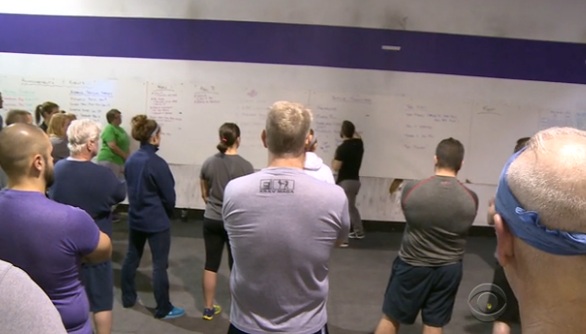 COLUMBUS, Ohio -- As mass shootings dominate headlines, the threat of them is dominating many minds. Now, a fitness instructor in Ohio is offering classes on how to fight back.

"Right now there is a big buzz going around in the wake of Paris and San Bernardino," Jannetti explains.

Since the recent terrorist attacks, demand has skyrocketed.

"We filled the January course that's going to be coming up here in a couple of weeks," said Jannetti. "We have 40 people already, and I have a wait list of about 20 more."

Amid heightened fears of terrorism, and mass shootings making headlines just about every day, Jannetti's course, just outside of Columbus, Ohio, is one of many being offered across the country.

As the year draws to an end, mass shootings are weighing heavily on people's minds. As a new poll shows that 68 percent of Americans listed mass shootings in the U.S. as very or extremely important news events this year.

Linda Gause was among the nearly three dozen participants earlier this week who spent the majority of the three-hour course learning to tackle, disarm and fight back when and if possible.

"I'm older than a lot of the people here and for me it's a matter of having confidence as I go forward," Gause said.

In a video, the FBI encourages people who find themselves in an active shooter situation to run, hide or as a last option -- fight. And that is where Jannetti focuses his training.

Jannetti said they try to get people in action.

"We try to get them in there fighting and make them at least understand that if that's where you will find yourself,then you need to be able to do it and you're capable of doing it," he said.