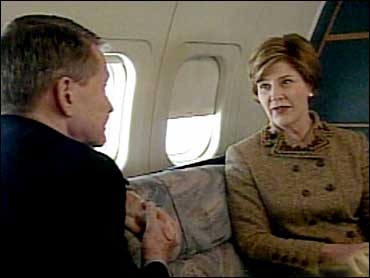 First lady Laura Bush talks to CBS News White House Correspondent Bill Plante about everything from life in the White House and on the campaign trail to what she thinks about how the media has covered her twin daughters. It is the second part of an exclusive interview for The Early Show.

She's been called George Bush's secret weapon. Mrs. Bush is much lower-key than her husband, but no less effective. On a recent trip to the key state of Florida, she told us she expects to be even more active in the months to come. We asked if she had any advice for the wives of her husband's Democrat challengers.

Mrs. Bush says, "I know what it's like, and I have a lot of empathy for them and know what they're going through, the ups and downs of it. You know, the winning of Iowa, the losing of New Hampshire, or, you know, whatever, I really am understanding. I know what the process is like."

For the past three years, the Bush family has lived in the White House, a very special privilege.

Mrs. Bush says, "Well, the best part, of course, is that it's so beautiful. And it's such a monument to American history, to live in that house. And you have a real empathy for all the people who lived there before you, for the way they suffered, for the happiness that they had there, also, for the challenges they faced, and as certainly as we look at the challenges that our country is facing right now."

But as special as the White House is, it's also confining.

She says, "The isolation of it, the not being able to walk outside and, you know, that part of it, for me. I love to go for walks, I'd love to be able to walk up and down the mall in Washington, it's so beautiful."

Then, Mrs. Bush let us in on a little secret.

She says, "I actually have done that a few times. If I get up early enough, before anybody is out, I can do that."

The Bushs' twin daughters, Jenna and Barbara, are now 22. They've stayed out of the spotlight - except for a couple of incidents before they were old enough to drink. The publicity upsets their mother.

"Yes," Mrs. Bush says, with a laugh. "I really do. I'm grateful that most of the press, and the media have let Barbara and Jenna have their privacy since they are private citizens, since they didn't run for office and since they're the age they are. We want them to be able to live their lives just like we're able to live our lives but we want them to live them with, in privacy, if that's what they choose."

Asked if the girls would work for their father's re-election campaign, Mrs. Bush replies, "You know, I don't know about that. I have no idea. I'm going to actually ask them if they want to. They didn't in the last one."

The first lady is probably best known for promoting literacy programs. But she's also been a big advocate of the campaign to make women aware of heart disease. And in a couple of weeks, she'll be talking about that on The Early Show. So stay tuned!