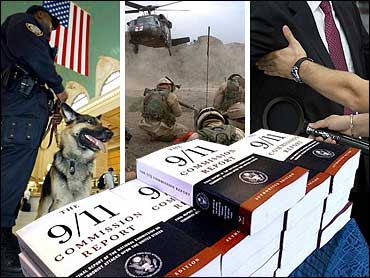 With the momentum of last week's Sept. 11 commission report behind it, the Senate Government Affairs Committee is weighing politically touchy proposals to make massive changes to the intelligence community.

Bucking the tradition of a quiet summer recess on Capitol Hill, the committee has arranged Congress' first hearing Friday into the commission's recently released report. Senators were to begin discussions of the panel's recommendations and the rationale behind them with the commission's Republican chairman, Thomas Kean, and his Democratic vice chairman, Lee Hamilton.

The committee's chairwoman, Susan Collins, a Maine Republican, said she plans to focus on two of the most complex proposals: the creation of a new national counterterrorism center and a national intelligence director with expanded powers over the 15-agency intelligence community.

Both would almost certainly take power away from two dominant forces in the intelligence community, the CIA and the Defense Department. Collins and the panel's top Democrat, Connecticut Sen. Joe Lieberman, generally support the commission's approach, although both say they want to carefully study the recommendations.

In a joint statement prepared for the hearing, Kean and Hamilton said government organization is only part of their agenda, outlined in more than 40 recommendations.

"No one should be mistaken in believing that solving structural problems in the executive branch addresses completely, or even satisfactorily, the current terrorist threat we face," they said.

The commissioners said the new center will create a system as flexible and resourceful as the enemy. And the national intelligence director, who will have sweeping authority including spending control over the entire intelligence community, is essential to improve coordination.

"We have concluded that the intelligence community isn't going to get its job done unless somebody is in charge. That is just not the case now, and we paid the price," the commissioners said.

Under public and political pressure to enact changes, President George W. Bush has created a working group to study the commission's recommendations and draft executive orders that could immediately implement some of the proposals. Other commission proposals include disclosing now-classified intelligence budget figures and institutionalizing changes ongoing at the FBI.

A senior administration official said aides were finishing draft versions to present to President Bush, who would adopt some or all of them soon.

The calls for reform come shortly after the largest government reorganization in 50 years with the opening of the Homeland Security Department, which celebrated its one-year anniversary in March. As in that restructuring, Collins said she expects some resistance.

"The committee's experience with the creation of the Department of Homeland Security teaches us that it is always difficult to undertake a major reorganization," she said. "It takes a sea-change in thinking."

Given the Sept. 11 commission's findings and a recent Senate report that found major failings in the prewar intelligence on Iraq, Lieberman said the case for intelligence reform is — if anything — more compelling than it was for creating a Homeland Security Department.

He dismisses arguments that major changes shouldn't be made given the ongoing war against terrorism, as acting CIA Director John McLaughlin has suggested. "The fact that we are in the middle of a war ... gives the commission's recommendations powerful urgency," Lieberman said.

The hearing is the first of at least 15 that will be held in the coming weeks by more than a half dozen House and Senate committees. Collins said the Republican Senate leadership has encouraged her to stay focused on national intelligence director and counterterrorism center and try to produce a bill by Oct. 1.

Congressional aides are also examining a series of issues related to the proposals. Among them: