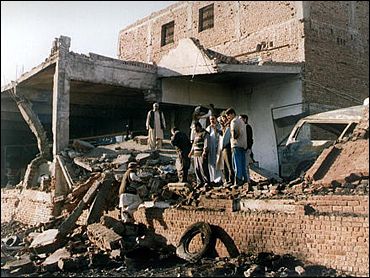 Shipping containers being loaded with fireworks caught fire on Tuesday, sparking a series of powerful explosions that killed at least 17 people — including two children from a school near the blast site — officials said. Dozens of other people were injured.

The explosion went off Tuesday afternoon as the fireworks were being placed in two containers for shipment to Lahore from the town of Sialkot, 60 miles to the northeast of the provincial capital city.

Many of the burning fireworks fell on the roof and in the courtyard of the school, setting off a blaze there, deputy police chief Syed Ahmed Gondal told The Associated Press.

Brig. Javed Iqbal Cheema, the director general of the crisis management center at the Interior Ministry confirmed that 17 people had been killed. He said two of those killed were children at the school, and most of the rest appeared to be workers at the shipping depot where the blast occurred.

Hospital officials in Sialkot said at least seven of the injured were in critical condition.

Rescue teams rushed to the area and were working to save lives and recover the bodies of those killed.

It was not clear what caused the fireworks to go off, but authorities said they would investigate.

Lahore, the main city in eastern Pakistan, is a central marketplace for the sale of fireworks in the country, and traders bring the material from all over. The government has tried, unsuccessfully, to crack down on the trade.

In June 2001, an explosion at a private house used for making fireworks killed eight people in a poor section of Lahore.