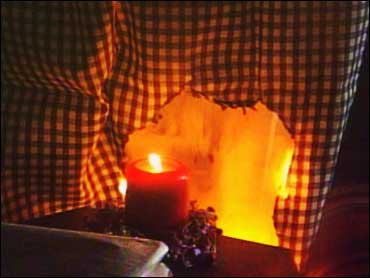 People use candles more frequently than they used to, as mood-setters, decorative items, for special occasions, and more.

But that's led to a growing number of house fires.

The National Candle Association says there are some 18,000 candle-caused fires annually in the United States, and experts blame carelessness on the part of candle users.

Deaths from home fires have decreased by 50 percent since the 1970s because of public education and the widespread use of smoke alarms, but the candle fire problem has been growing.

Candles are used in approximately 7 out of 10 homes, according to the candle association. Consumers spend about $2 billion annually on them in the U.S.

The office says 44 percent of candle-sparked fires start in bedrooms, 19 percent in living rooms, family rooms or dens, 11 percent in bathrooms, seven percent in kitchens, and four percent in dining rooms. Some 36 percent of candle fires occur because candles were left unattended, abandoned or inadequately supervised, the office says, while 18 percent began because some form of combustible material was left too close, and nine percent were started by children playing with candles.

Among his candle safety recommendations: