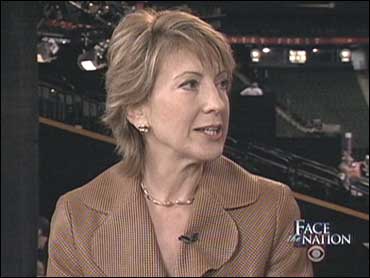 Political Players is a continuing conversation with the leaders, consultants and activists who shape American politics. This week, CBS News' Brian Goldsmith talked with Carly Fiorina, a top surrogate and adviser for John McCain's campaign about the campaign and the economy. [Editor's note: This interview was conducted earlier this week, before Fiorina commented that none of the presidential candidates, including McCain and Sarah Palin, were qualified to run a large corporation.].

CBSNews.com: This week, we've seen almost unprecedented turmoil on Wall Street and watched Lehman and Merrill disappear before our eyes. Your candidates--Senator McCain and Governor Palin--have both talked about better regulating Wall Street, replacing a patchwork of regulations with a better system. What does that involve, specifically?

Carly Fiorina: McCain has been saying for some time that Fannie and Freddie were an accident waiting to happen, that we had insufficient oversight from Washington on Wall Street as the subprime crisis continued to unfold. So, first, it means that we have to require a heightened level of transparency and accountability by Wall Street firms.

A lot of this problem was caused by a set of very complex financial instruments that were based on an assumption, that housing prices could only rise. That's clearly a bad assumption. There was insufficient transparency around the risk of that. They didn't have sufficient capital.

So, it's not simply pulling together the patchwork of ineffective regulatory agencies that exists today in Washington--which it certainly requires. But it's also then saying, in a more streamlined and effective regulatory regime, we're going to demand transparency of Wall Street. And we're going to demand accountability, to shareholders and to taxpayers.

Carly Fiorina: The first stimulus package didn't do much good. We now know that. John McCain has been calling for stimulus in the form of, for example, a gas tax holiday for some time, which gives Americans relief right where they need it the most. But I think the most important thing from a McCain administration point of view is that we need to get the economy growing again in real terms.

So let's not raise people's taxes, but importantly, let's focus on creating more jobs here at home, instead of incenting corporations to send them overseas. Let's make sure that small businesses are able to hire and grow more effectively. He has very specific measures to help small businesses do that. For example, allowing them to expense their investments in one year.

I reference small business because it creates two-thirds of the jobs in this country. So we have to focus on making it easier for small businesses to form and hire. And achieving energy independence is a job creator in this country. If we build nuclear power plants, if we focus on clean coal, if we invest in green technologies, all of those things build jobs.

CBSNews.com: A number of Democrats and a number of columnists, including Tom Friedman, have criticized Senator McCain for not taking a stand for alternative energy tax credits, for supporting subsidies for the oil companies. How is that investing in green technologies?

He has said all those things. He is against raising taxes on oil companies, because we know that doesn't work. It raises the price to consumers, and it decreases the supply. But he is also against big giveaways to oil companies. The 2005 Bush-Cheney energy bill was full of giveaways to big oil companies. John McCain opposed it. Barack Obama voted for it.

Carly Fiorina: Oh yes, many. For example, the regulatory reform necessary on Wall Street. John McCain has said for some time, the FCC isn't doing its job. John McCain has called for cap and trade, for many years, and said global warming was real. John McCain voted against the 2005 Bush-Cheney energy bill, because it was full of giveaways.

CBSNews.com: John McCain, if elected president, will face what seems like a half a trillion dollar budget deficit. Even if you eliminated all the earmarks, which nobody thinks is particularly likely, you'd only save about $20 billion a year. Where else would he cut spending? And since he's ruled out raising taxes, how does he close that gap?

Carly Fiorina: Well, in part, he would close that gap by doing what Bill Clinton, as a Democratic president, did with a Republican Congress. He would do that by coming to a bipartisan agreement, around a package of tax cuts and spending cuts. I think the question you just asked also needs to be asked of Barack Obama, who now, finally, agrees that we shouldn't raise taxes on the American people.

He too now believes that the Bush tax cuts shouldn't be repealed. He too now agrees that it is counterproductive in a faltering economy to raise taxes on the American people, which is what would happen if you repealed the current tax structure. But he also is proposing massive increases in government spending.

These financial institutions failed today, in part, because they had borrowed too much money, and couldn't pay their debts, when the price of the assets that they had borrowed to buy, i.e. homes, began to fall. We have to get the government's financial house in order as well. John McCain has a track record of demanding that. He has a track record of reform. Barack Obama will grow the size of government dramatically.

CBSNews.com: But if you're going to not only oppose raising taxes but also do additional tax cuts, and you're facing a half a trillion dollar 2009 deficit, how do you close that gap if you're not clearer about where you would cut spending, beyond finding efficiencies in more government agencies?

Carly Fiorina: The facts are that John McCain has said for a number of years now that it is irresponsible that a Republican administration and a Republican Congress presided over a 60 percent increase in discretionary spending in the last seven years.

So specifically, just to give you two examples, he would review every government agency and post the results on the Internet. Now I can tell you, as a businessperson, that when you create that kind of transparency, so that every American taxpayer can see how their tax dollars are actually getting spent, it will create a lot of impetus to reform a lot of agencies.

CBSNews.com: Can you think of any specific policies where Senator Clinton and Governor Palin agree?

Carly Fiorina: Gee, I would have to think about that.

CBSNews.com: Because, obviously, your campaign has made a big deal of reaching out to Senator Clinton's voters, and has cited Governor Palin as somebody who could help do that. And I'm just trying to think of a specific policy where the two of them would agree.

Carly Fiorina: Well, I would tell you that one of the things that I think attracts Hillary Clinton's supporters to Governor Palin, and I'm someone who's spoken to a great many of them, is in Hillary Clinton, they saw someone that they thought understood what their lives were like.

And I think many people see Sarah Palin and say, she understands what my life is like. She understands what being a working mom, making choices every day, is like. I will consider your policy question, because I haven't looked at Senator Clinton's policy record in some time. But I would tell you that Senator Clinton and John McCain worked on a number of issues together, and are real friends.

CBSNews.com: Do you really believe that Senator Obama was referring to Sarah Palin as a pig last week?

Carly Fiorina: You know what? I don't know what he was referring to. I truly don't. But in the context of what was going on, it was a foolish remark, which I'm sure he regrets.

CBSNews.com: But didn't it seem the pig was the GOP record and the lipstick was trying to package it as change? I mean, a number of news organizations have said that that seemed clear from the context.

Carly Fiorina: I don't know. I truly don't know. So, I won't ascribe exact motivation to him. I will just say it was a foolish comment. For a man who's careful with his words, I found it surprising. But I would also say that the Obama campaign people are champions at taking sound bites out of context.
By Brian Goldsmith