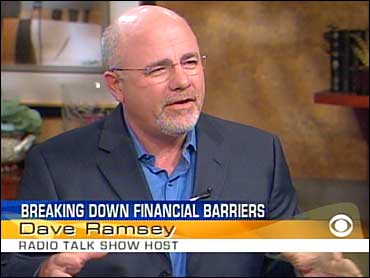 You may be your own worst enemy when it comes to achieving financial security. Much of it may be in your head, according to money maven and radio host Dave Ramsey.

After years of working with people in debt, Ramsey says it's become clear it isn't a simple lack of money that keeps people from achieving what he calls "financial peace." Instead, it's their attitude about money.

Ramsey has identified three common attitudes that act as barriers to financial peace: denial, keeping up with the Joneses, and ignorance.

Ramsey spoke about it on The Early Show Tuesday.

"Financial peace isn't the acquisition of stuff," Ramsey explained. "It's learning to live on less than you make, so you can give money back and have money to invest. You can't win until you do this."

Financial peace, he continued, is going to be different for everyone. For some people, achieving it will mean living like a millionaire. For others, it will simply mean being able to pay all the bills and put a little away for retirement each month.

So, Ramsey says, while financial peace sounds like a good thing, many of us are in debt as a result of our attitudes and approaches to money.

You can't fix a problem you won't admit you have, Ramsey says. You have to be willing to admit that your behavior is a problem before you can begin to alter that behavior, just as a chronic overeater or an alcoholic has to.

You know you're in denial if: