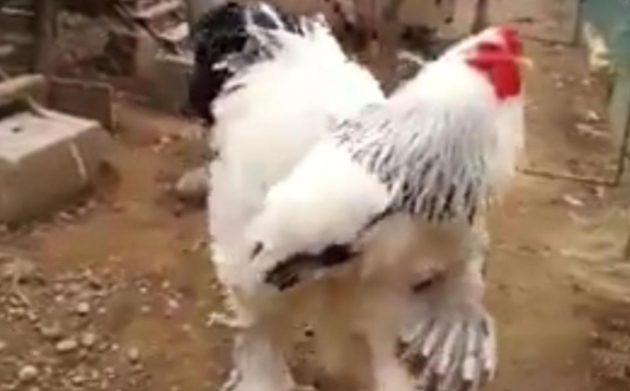 If you logged on to Twitter over the weekend, there’s a good chance you saw a “giant chicken” stroll across your screen, and watched the video on repeat as you analyzed the dog-sized animal’s confident strut out around his coop.

The minute-long video that somehow made its way onto Twitter was shared by 35,000 users as of Monday evening, and left thousands of people with a long list of questions: Is it a child in a chicken costume? Is it some kind of hybrid poultry that we didn’t know about?

Finally, after hours of unanswered questions, we got our answer.

“The chicken in that video is a Heritage Breed Brahma Chicken,” The Livestock Conservancy confirmed in a Facebook post Monday afternoon.

Often referred to as the “King of All Poultry,” Brahmas are large chickens with feathers on shanks and toes that come in three color varieties — light, dark and yellowish-beige. They’ve been known to reach incredible weights of 13 to 14 pounds for hens and 17 to 19 pounds for cocks.

“This breed was developed in America from very large fowls imported from China via the port of Shanghai,” The Livestock Conservancy explained in a post online.

Though they finally got the explanation they’d been looking for, that didn’t stop Twitter users from sharing their own theories as to the Brahma chicken’s true identity:

The origin of the video is still unclear, but Mashable reports that it was likely taken from a Kosovo-based Facebook group called Shpeztaria Dekorative, and the chicken, named “Merakli” appears to belong to a man named Fitim Sejfijaj.

Well, there’s no doubt about that, the world certainly did enjoy watching Merakli.