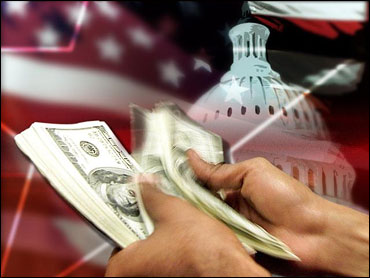 Congressional leaders have released final legislation to create a $700 billion bailout of the financial markets.

The House plans a vote on the rescue bill Monday. The Senate is expected to follow later this week.

The rescue is the largest government intervention in financial markets since the Great Depression. It would let the government take over huge amounts of devalued assets from beleaguered financial companies in hopes of unlocking frozen credit.

Democratic leaders in Congress are praising the rescue package for the financial industry as a vital move to shore up the sagging economy.

House Speaker Nancy Pelosi says the proposal is not a Wall Street bailout. Instead she calls it a buy-in to help the economy get turned around.

Pelosi spoke to reporters at the Capitol just after the final legislation was released Sunday and as House Republicans and Democrats met privately to review details and gauge support.

Senate Democratic leader Harry Reid says Congress won important concessions from the Bush administration in negotiating the bill. He says the White House wanted a blank check and lawmakers would not agree to that.

Flexing its political muscle, Congress insisted on a package that gives lawmakers a stronger hand in controlling the money than the Bush administration had wanted. The rescue plan casts Washington's long shadow over Wall Street with the federal government taking over huge amounts of devalued assets from beleaguered financial firms in exchange for more oversight.

The proposal, which would be phased so Congress can control the spending spigot, is designed to end a vicious downward spiral that has battered all levels of the economy, in which hundreds of billions of dollars in investments based on mortgages gone bad have cramped banks' willingness to lend.

"This is the bottom line: If we do not do this, the trauma, the chaos and the disruption to everyday Americans' lives will be overwhelming, and that's a price we can't afford to risk paying," Sen. Judd Gregg, the chief Senate Republican in the talks, told The Associated Press on Sunday. "I do think we'll be able to pass it, and it will be a bipartisan vote."

A breakthrough came when Democrats agreed to incorporate a GOP demand - letting the government insure some bad home loans rather than buy them - designed to limit the amount of federal money used in the rescue.

Another important bargain, vital to attracting support from centrist Democrats and Republicans who are fiscal hawks, would require that the government, after five years, submit a plan to Congress on how to recoup any losses.

Lawmakers could block half the money and force the president to jump through some hoops before using it all. The government could get at $250 billion immediately, $100 billion more if the president certified it was necessary, and the last $350 billion with a separate certification - and subject to a congressional resolution of disapproval.

Still, the resolution could be vetoed by the president, meaning it would take extra-large congressional majorities to stop it.

The presidential nominees came behind the outlines of the bailout.

"This is something that all of us will swallow hard and go forward with," said Republican Sen. John McCain of Arizona. "The option of doing nothing is simply not an acceptable option."

His Democratic rival, Illinois Sen. Barack Obama, sought credit for taxpayer safeguards added to the initial proposal from the Bush administration. "I was pushing very hard and involved in shaping those provisions," he said.

"We are not ready to say that a deal is done," Rep. Eric Cantor, R-Va.

Congressional leaders announced a tentative deal in the early hours of Sunday morning after marathon negotiations at the Capitol.

"We've still got more to do to finalize it, but I think we're there," said Treasury Secretary Henry Paulson, who also participated in the negotiations in the Capitol.

Executives whose companies benefit from the rescue could not get "golden parachutes" and would see their pay packages limited.

The government would receive stock warrants in return for the bailout relief, giving taxpayers a chance to share in financial companies' future profits.

To help struggling homeowners, the plan requires the government to try renegotiating the bad mortgages it acquires with the aim of lowering borrowers' monthly payments so they can keep their homes.

"Nobody got everything they wanted," said Democratic Rep. Barney Frank of Massachusetts, chairman of the House Financial Services Committee. He predicted it would pass, though not by a large majority.

Gregg, R-N.H., said he thinks taxpayers will come out as financial winners. "I don't think we're going to lose money, myself. We may, it's possible, but I doubt it in the long run," he said.

Frank appeared on C-SPAN, Obama was on CBS' Face the Nation, McCain spoke on "This Week" on ABC and Cantor was on "Late Edition" on CNN.