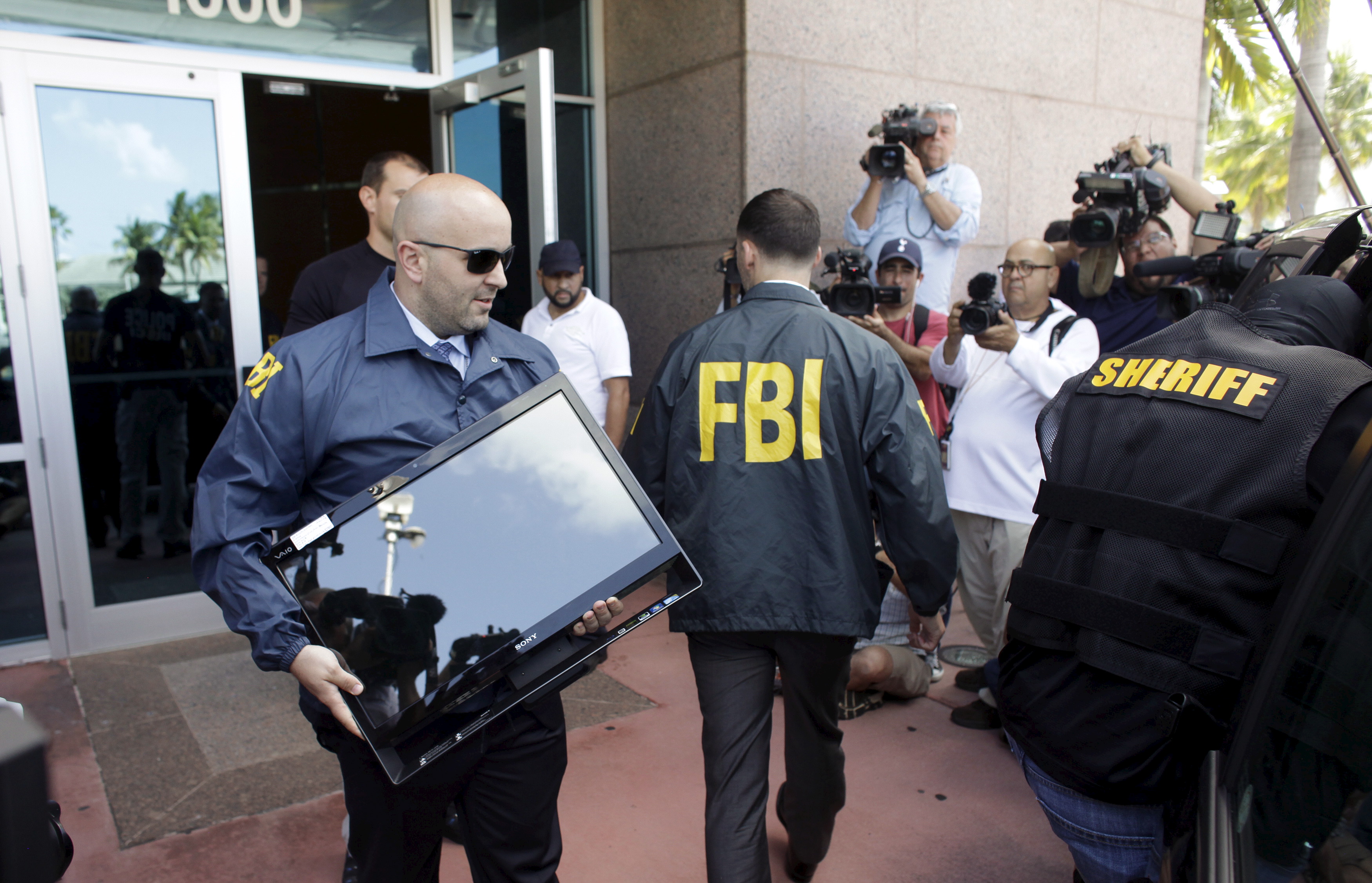 ZURICH -- The U.S. government launched an attack on what it called deep-seated and brazen corruption in soccer's global governing body Wednesday, pulling FIFA executives out of a luxury Swiss hotel to face racketeering charges and raiding regional offices in Miami.

U.S. prosecutors accused the leaders of soccer federations of tarnishing the sport for nearly a quarter century by taking $150 million in bribes and payoffs, laying out a sweeping corruption case that hinges on the testimony of insiders, including some who have agreed to cooperate in plea deals.

In announcing the racketeering conspiracy and other charges Wednesday against 14 defendants -- nine current and former officials with global soccer governing body FIFA, four sports marketing executives and an accused intermediary -- prosecutors also revealed four others had pleaded guilty in secret proceedings dating to July 2013. It's believed some or all are cooperating in the investigation.

Swiss officials also invaded FIFA headquarters, seizing records and computers to investigate whether the decisions to award World Cups to Russia and Qatar were rigged.

Scandals and rumors of corruption have dogged FIFA throughout the 17-year reign of its president, Sepp Blatter, but he was not named in either investigation. He is scheduled to stand Friday for re-election to a fifth, four-year term, and the organization said the vote would go ahead as planned, despite the latest turmoil.

"We welcome the actions and the investigations by the U.S. and Swiss authorities and believe that it will help to reinforce measures that FIFA has already taken to root out any wrongdoing in football," Blatter said in a statement. The organization said it was cooperating fully with the investigation.

Some of the biggest names in soccer said they had complained for years about corruption in FIFA, which oversees the world's most popular sport and generates billions in revenue each year.

Former Brazilian star and outspoken FIFA critic Romario said, "Someone had to eventually arrest them one day."

Authorities conducted early morning raids in Zurich at FIFA headquarters and the five-star Baur au Lac Hotel. In Miami, FBI and IRS agents carried computers and boxes out of the headquarters of CONCACAF, the governing body of North and Central America and the Caribbean, whose past and current presidents were among 14 defendants under indictment for corruption.

Swiss police arrested seven soccer official at the request of American prosecutors and threatened them with extradition to the U.S. Four other soccer and marketing officials agreed to plead guilty.

"Beginning in 1991, two generations of soccer officials ... used their positions of trust within their respective organizations to solicit bribes from sports marketers in exchange for the commercial rights to their soccer tournaments," U.S. Attorney General Loretta E. Lynch said at a news conference in New York. "They did this over and over, year after year, tournament after tournament."

U.S. prosecutors said they will seek forfeiture of more than $151 million the government alleges was illegally obtained. They said the indictments represented only the beginning of their efforts.

Richard Weber, head of the IRS Criminal Division, called the case "the World Cup of fraud."

Two current FIFA vice presidents were among those arrested and indicted, Jeffrey Webb of the Cayman Islands and Eugenio Figueredo of Uruguay, the Justice Department said. The others are Eduardo Li of Costa Rica, Julio Rocha of Nicaragua, Costas Takkas of Britain, Rafael Esquivel of Venezuela and Jose Maria Marin of Brazil.

All seven are connected with the regional confederations of North and South America and face up to 20 years in prison if convicted.

FIFA suspended 11 people, including Webb and Figueredo, from all soccer-related activities following the U.S. announcement.

Webb called himself a reformer when he was elected as CONCACAF president in 2012. Prosecutors alleged that part of the bribe money directed to Webb was transferred to the account of a contractor building a swimming pool at Webb's home in Loganville, Georgia.

The seven soccer officials arrested are connected with CONCACAF or CONMEBOL, South America's governing body. Each faces up to 20 years in prison if convicted.

The Swiss justice ministry said six of the seven officials arrested oppose extradition to the United States, adding that U.S. authorities now have 40 days to submit the formal extradition request.

One of those detained, who was unidentified, agreed to "a simplified extradition procedure," meaning he can be sent to the U.S. in the coming days.

Four of the men indicted are sports marketing executives and another works in broadcasting. Jack Warner, a former FIFA vice president from Trinidad and Tobago, was among those indicted, and he turned himself in to police in Port-of-Spain after they issued an arrest warrant at the request of U.S. authorities. Warner, who has proclaimed his innocence, was forced out of FIFA in 2011 over a bribery scandal.

Warner was expected to spend Wednesday night in jail after surrendering to face an arrest warrant issued at the request of U.S. authorities, who filed corruption charges against him and 13 others tied to international soccer.

He appeared in court, where a judge read eight counts against him and then granted him $2.5 million bail on certain conditions, including that he surrender his passport and report to police twice a week. Warner did not enter a plea and was scheduled to appear in court again July 12.

Prosecutors said CONMEBOL reached an agreement in 2013 with a new company, Datisa, on a $240 million contract for rights to the Copa America in 2015, 2019 and 2023, and the following year to a $112.5 million deal for the 2016 Copa America Centenario in the U.S. As part of the deals, prosecutors said Datisa agreed to pay $110 million in bribes to South American soccer officials.

"They were expected to uphold the rules that keep soccer honest and to protect the integrity of the game," Lynch said. "Instead, they corrupted the business of worldwide soccer to serve their interests and to enrich themselves."

U.S. prosecutors said they had uncovered a dozen different schemes, including $10 million in payments from a FIFA account in Switzerland to an account in New York for credit to an account controlled by Warner. South Africa, with the backing of Nelson Mandela, beat rival bids from Morocco and Egypt to host the tournament in 2010, four years after narrowly losing out to Germany for the previous tournament.

The Swiss prosecutors' office said the U.S. probe was separate from its investigation but that authorities were working together.

The votes to award the World Cups to Russia and Qatar have been surrounded in controversy and accusations of corruption.

The Swiss prosecutors' office said in a statement it seized "electronic data and documents" at FIFA's headquarters Wednesday as part of the probe. Swiss police said they will question 10 FIFA executive committee members who took part in the World Cup votes in December 2010.

The Swiss investigation against "persons unknown on suspicion of criminal mismanagement and of money laundering" again throws into the doubt the integrity of the voting.

Qatar, a tiny Gulf nation with little soccer tradition, was criticized from the start for its extreme summer heat. FIFA has since been forced to move the tournament to November-December instead of the usual June-July time slot.

FIFA also hired former U.S. attorney Michael Garcia to investigate the 2018 and 2022 bid process. His findings were never fully released and both Russia and Qatar were confirmed as hosts. Garcia's full report was turned over to Swiss authorities in November, prompting Wednesday's raid on FIFA headquarters.

Russian Sports Minister Vitaly Mutko, who is also a FIFA executive committee member, told The Associated Press, "we've got nothing to hide."

"We're prepared to show everything," Mutko said in a telephone interview. "We've always acted within the law."

Hundreds of soccer officials are in Switzerland for the FIFA congress, where Blatter is widely expected to win re-election.

However, the chairman of the English Football Association says Blatter should leave his job immediately in the wake of the string of corruption arrests of some of the federation's top officials.

Dyke said he was unconvinced by Blatter's declaration that FIFA can regain the trust of soccer fans by stepping up efforts to root out corruption.

Nike, which is not an official sponsor but pays to have the Brazilian and other countries' national teams wear its gear, said it is cooperating with the U.S. investigation.

European football's governing body, known as UEFA, said the election should be postponed and that it would consider boycotting the FIFA congress following the arrests. UEFA general secretary Gianni Infantino said the corruption investigations into FIFA "tarnish the image of football as a whole." In a sign of the loyalty that Blatter enjoys, however, the 46-voter Asian Football Confederation said it opposed a delay and repeated its support for the 79-year-old president.

Blatter had been scheduled to attend a meeting of the Confederation of African Football in a different downtown Zurich hotel, but he canceled his appearance.

Blatter's only opponent in Friday's election, Prince Ali bin al-Hussein of Jordan, seized on the situation to push his candidacy.

"We cannot continue with the crisis in FIFA, a crisis that has been ongoing and is not just relevant to the events of today," the prince said in a statement. "FIFA needs leadership that governs, guides and protects our national associations. ... Leadership that restores confidence in the hundreds of millions of football fans around the world."

In Florida, a small group of agents from the FBI and IRS executed search warrants at CONCACAF headquarters in Miami Beach.

CONCACAF reported itself to U.S. tax authorities in 2012. Then based in New York, the organization had not paid taxes over several years when its president was Warner and secretary general was Chuck Blazer of the United States, who was accused of failing to report more than $11 million in income and agreed to plead guilty.

Warner left soccer in 2011 to avoid FIFA sanctions in a bribery scandal during that year's presidential election. Blazer left in 2013 and has pleaded guilty to charges, the Justice Department said Wednesday.

Warner's successor as CONCACAF leader and FIFA vice president is Webb, who was staying at the Baur au Lac this week.

The Swiss Federal Office of Justice said in its statement that U.S. authorities suspect the arrested officials of having received or paid bribes totaling millions of dollars and that the crimes were agreed to and prepared in the U.S., and payments carried out via U.S. banks.