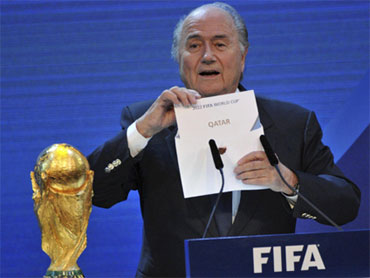 FIFA's president Sepp Blatter apologized Friday for his remarks that gay fans should abstain from sex during the 2022 World Cup in Qatar.

Blatter told journalists in Abu Dhabi that he was sorry if anyone was offended by his comments this week in South Africa, where he said gay visitors should "refrain from any sexual activities" while in Qatar because of the Gulf nation's strict laws against homosexuality.

"It was not my intention and never will be my intention to go into any discrimination," Blatter said in Abu Dhabi, which is hosting the Club World Cup. "This is exactly what we are against. If somebody feels that they have been hurt, then I regret (it) and present apologies."

Juris Lavrikovs, communications director for the European branch of the International Lesbian, Gay, Bisexual, Trans and Intersex Association, said the comments were "very unfortunate and have left people deeply offended" and said "we are talking about a very basic human right that is being violated."

Lavrikovs said Qatar and more than 70 other countries still criminalize individuals for homosexual relationships, and some countries punish them by death sentence.

Accuser: I Told Roethlisberger "This Is Not OK"

Qatar beat the United States, Australia, Japan and South Korea in the FIFA vote on Dec. 2 to host the 2022 World Cup.

Since winning the right to host the tournament, concerns have been raised about Qatar's social restrictions, limiting the drinking of alcohol to hotels, frowning on public affection and considering homosexuality taboo.

Herman Ouseley, chairman of Kick It Out, a British campaign group for equality and inclusion in soccer, said this week that he expected better from someone in Blatter's position.