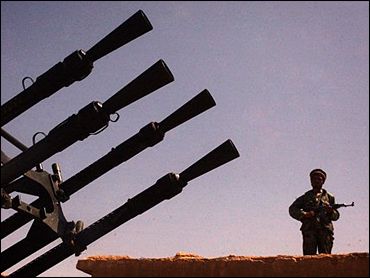 More than 100 Afghan and American troops supported by U.S. warplanes clashed with 50 militants near the mountainous Pakistani frontier Monday, inflicting "heavy losses" on the rebels in the fiercest border skirmish in months, the U.S. military said.

An Afghan commander said the bodies of two dead militants were found after the fighting in Khost province, a former al Qaeda stronghold in southeastern Afghanistan. He said two Afghan soldiers were also killed.

"The militants retreated in panic and were pursued by the attack aircraft," Peat said.

Baz said four Afghan soldiers were wounded, two of them fatally. Peat said two of the injured were evacuated to a hospital for treatment, but made no mention of fatalities in that skirmish.

Four hours later, U.S. and Afghan forces, supported A-10s, fought about 20 of the militants in a renewed battle.

This time, one Afghan soldier was killed and three others wounded, he said. Peat didn't give a specific figure for the rebel deaths.

Afghan and American military bases along the mountainous border regularly come under attack from rebels armed with rockets, mortars and guns.

Some of the attacks originate in tribal areas on the Pakistani side, where thousands of Pakistani troops have fought fierce battles recently in an attempt to dislodge hundreds of suspected foreign fighters.

The soldier was riding back from a voter registration site to Lashkargah, the capital of Helmand province, on Sunday evening when his jeep came under fire, said Mohammed Wali, spokesman for the provincial governor.

At least 10 election workers have died in a string of attacks since May, but the violence has failed to halt a registration drive that the United Nations says has reached more than 90 percent of the estimated electorate so far.
By Stephen Graham