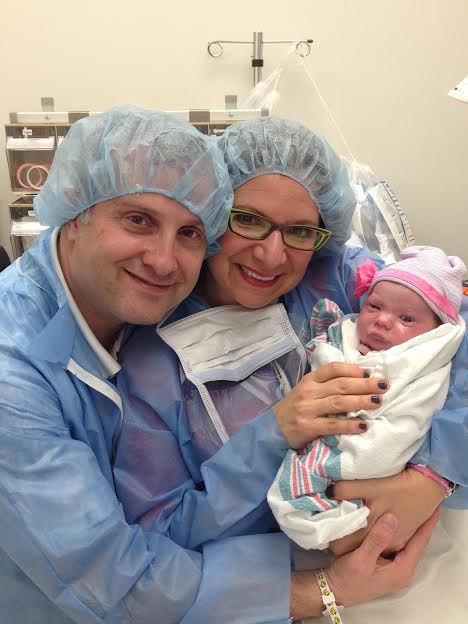 When reproductive endocrinology and infertility doctor Dr. Angie Beltsos learned she could not carry the fourth baby she longed for, she found herself in a similar situation as the patients she treats at the Fertility Centers of Illinois, in the Chicago area.

A mother of three, Beltsos had tried for several years to have another baby. When she finally did become pregnant again, complications led to the baby being born prematurely and ultimately not surviving.

"I had delivered many babies at different ages and witnessed couples go through terrible moments. It provides an element of perspective and compassion and pain to go through it yourself, so after that was a very difficult time for us," Beltsos shared with CBS News.

Beltsos says the tragedy left a void in her life that her family urged her to fill. When she had trouble conceiving naturally, Beltsos tried in vitro fertilization (IVF), a process in which her eggs were harvested from her body and then fertilized with her husband's sperm in a laboratory, creating an embryo. IVF is a popular procedure for couples struggling with infertility.

With more people delaying marriage or starting families later in life, infertility can be a problem for many couples. The Centers for Disease Control and Prevention report that about 12 percent of women aged 15 to 44 in the United States have difficulty getting pregnant or carrying a pregnancy to term. Men as well as women can suffer from a variety of infertility problems, and a woman's age may interfere with her ability to have a successful pregnancy.

"When you hit your 40s, the ability to make an egg that can make a healthy baby starts to go down. And thank goodness I had captured some ahead of time before the clock ran out of time for me to be able to conceive naturally," said Beltsos.

However, multiple miscarriages later, Beltsos recognized that even with IVF she would not be able to carry a baby to term herself. Still, she remained undeterred. With a compelling desire to complete her family and a few embryos remaining, Beltsos and her husband finally decided to use a gestational surrogate -- a woman who would have Beltsos' fully fertilized embryo implanted into her uterus and would then carry and deliver the baby.

"This unique thing of using a surrogate was sort of a blend. It's a professional relationship and one that's personal," said Beltsos.

On the professional side, paying a woman to carry a couple's baby is a rapidly growing business around the world. In the United States, a surrogate can make tens of thousands of dollars while the couple paying for the surrogacy may end up shelling out upwards of $100,000. In addition to paying the surrogate, the couple is responsible for the surrogate's medical care and expenses as well as the agency's fees. Commercial surrogacy is highly regulated in the United States to protect the rights of the surrogate, the intended parents and the baby.

Though less expensive, the process can be more complicated in other countries. Hopeful would-be parents without the funds to pay U.S. prices for surrogacy can go through countries like India, Thailand and Ukraine. This is risky, however, as surrogacy in these countries is a largely unregulated business, which comes with its own moral, medical and legal costs and complications.

"There are different countries that are becoming very popular because they are not very expensive, but one must be very careful in those situations if you are going to do it, that you investigate very carefully the medical care. You will not find equivalent therapies to the United States," Beltsos cautions.

Another complicating factor for parents-to-be using international surrogates: they may have trouble bringing their baby home as documents and birth certificates from other countries may not be accepted.

On a personal note, Beltsos wanted to find a surrogate who shared her similar health habits and values. As a doctor, Beltsos was also uniquely qualified to manage the pregnancy, but worked hard to surrender control and develop trust in her surrogate to make good decisions.

"You have to find a surrogate that's like-minded with you as a woman as a mom, that she would do things that you would do. She would ask my advice and I would offer these things. I tried not to micromanage her or the doctor taking care of her."

Beltsos' patience paid off. The surrogate carried a healthy baby girl to term and delivered Beatrice in February 2015. Beltsos was there for the birth and was ecstatic to finally hold her new daughter in her arms.

"It was a magical experience to be able to have our fourth baby and for her to be healthy and to go through this to have our family," she said.