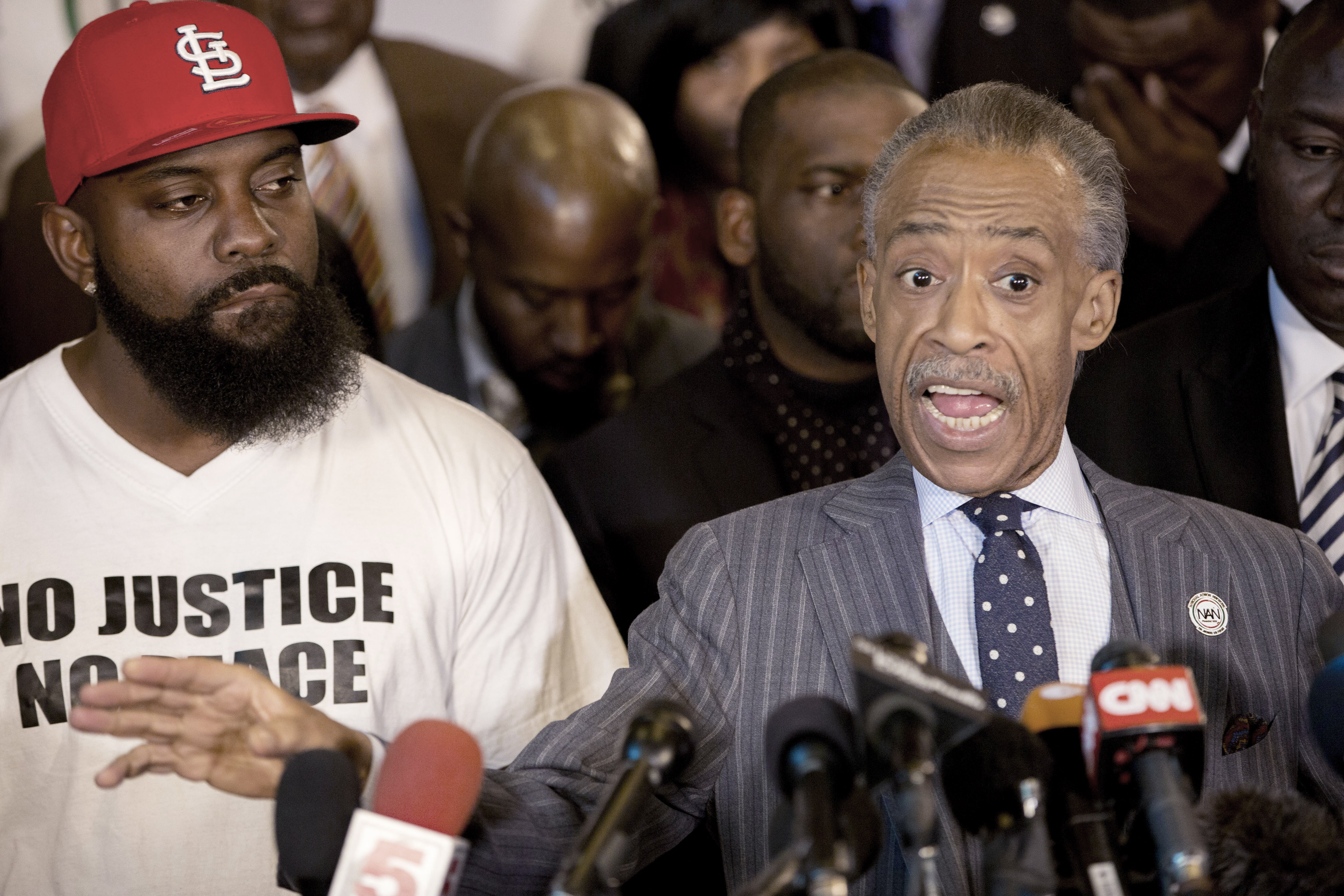 Attorneys for Michael Brown's family said Tuesday that Brown's mother broke down after the grand jury decision announcement because she was "upset that the killer of her unarmed child would not be brought to justice."

Attorney Benjamin Crump said that the process that led to a white officer not being indicted in the fatal shooting of the unarmed, black 18-year-old was unfair and broken.

"The process should be indicted," Crump said.

Crump, who called on all police officers to wear body video cameras, also said, "We could see what the outcome was going to be, and that is what occurred last night."

McCulloch has deep family roots among police: his father, mother, brother, uncle and cousin all worked for St. Louis' police department, and his father was killed while responding to a call involving a black suspect.

Crump said that McCulloch "has symbiotic relationship with the local police" and he should never have been allowed to be the prosecutor on the case.

"We are not insane," Crump said. "We know that our children deserve equal justice."

Attorney Anthony Gray said the decision was a "direct reflection of the presentation of the evidence," and criticized what he called "cynicism" in the questions found in the grand jury documents.

"You have broken our hearts but you have not broken our backs," Sharpton said.

On Tuesday, smoke billowed from burned-out buildings and sidewalks were strewn with broken glass after Ferguson erupted over the grand jury's decision.

Firefighters were dousing the blackened remains of some Ferguson businesses and at least one was still ablaze Tuesday morning. Some stores that escaped fire had their display windows smashed, but the St. Louis suburb's streets were mostly clear.

Monday night's protests were far more destructive than any of those that followed Brown's Aug. 9 death, with more than a dozen businesses badly damaged or destroyed. Authorities reported hearing hundreds of gunshots, which for a time prevented fire crews from fighting the flames.

Gov. Jay Nixon issued a statement saying he was calling in more National Guard troops to assist law enforcement in Ferguson, but he didn't say how many additional troops or how long they would remain.

Jon Belmar, chief of the St. Louis County police, said that unless his agency could bring in 10,000 officers, "I don't think we can prevent folks who really are intent on destroying a community."

At least 14 people were injured during the protests, including two who were admitted to Barnes-Jewish Hospital for treatment of undisclosed injuries. That hospital treated and released five people. Six people were treated for minor injuries at Christian Hospital, near Ferguson. Saint Louis University Hospital treated and released another. Other hospitals didn't immediately respond to phone messages and emails seeking comment.

Meanwhile, many area districts cancelled classes out of concern for the safety of students traveling to and from school.

The grand jury's decision means that Officer Darren Wilson, who is white, will not face any state criminal charges for killing Brown, whose death inflamed deep racial tensions between many black Americans and police.

Wilson's lawyers issued a statement praising the decision and saying the officer, who has remained out of the public eye since the shooting, is grateful to his supporters.

McCulloch said the jury of nine whites and three blacks met on 25 separate days over three months, hearing more than 70 hours of testimony from about 60 witnesses, including three medical examiners and experts on blood, toxicology and firearms.

"They are the only people that have heard and examined every witness and every piece of evidence," he said, adding that the jurors "poured their hearts and soul into this process."

CBS News legal analyst Rikki Klieman said Tuesday that the grand jury relied on the forensic evidence and they also believed Wilson's version of what transpired on Aug. 9.

"Officer Wilson's story, according to the prosecutor, matches the physical evidence much more than many of the eyewitnesses' stories," Klieman said. "And one of the things about Officer Wilson when he does testify, which he didn't have to do, he chose to do, is that ... he talks about his subjective fear ... and he is terrified by virtue of his own words. Clearly the grand jury chose to believe him."

In the first flash of unrest after the grand jury announcement, Belmar said he told officers to back off, suggesting they handle the situation as if it were a festival or baseball game. But the situation quickly "spun out of control," as protesters looted businesses and set fire to numerous vehicles, including at least two police cars. Officers eventually lobbed tear gas from inside armored vehicles to disperse crowds.

As McCulloch read his statement, Brown's mother, Lesley McSpadden, sat atop a vehicle listening to a broadcast of the announcement. When she heard the decision, she burst into tears and began screaming before being whisked away by supporters.

The crowd with her erupted in anger, converging on the barricade where police in riot gear were standing. They pushed down the barricade and began pelting police with objects, including a bullhorn. Officers stood their ground.

Speaking for nearly 45 minutes, a defensive McCulloch repeatedly cited what he said were inconsistencies and erroneous witness accounts. When asked by a reporter whether any of the accounts amount to perjury, he said, "I think they truly believe that's what they saw, but they didn't."

The prosecutor also was critical of the media, saying "the most significant challenge" for his office was a "24-hour news cycle and an insatiable appetite for something - for anything - to talk about."

McCulloch never mentioned that Brown was unarmed when he was killed.

Brown's family released a statement saying they were "profoundly disappointed" but asked that the public "channel your frustration in ways that will make a positive change. We need to work together to fix the system that allowed this to happen."

Shortly after the announcement, authorities released more than 1,000 pages of grand jury documents, including Wilson's testimony.

Wilson told jurors that he initially encountered Brown and a friend walking in a street and, when he told them to move to a sidewalk, Brown responded with an expletive. Wilson then noticed that Brown had a handful of cigars, "and that's when it clicked for me," he said, referring to a radio report minutes earlier of a robbery at a nearby convenience store.

Wilson said he asked a dispatcher to send additional police, and then backed his vehicle up in front of Brown and his friend. As he tried to open the door, Wilson said Brown slammed it back shut.

The officer said he pushed Brown with the door and Brown hit him in the face. Wilson told grand jurors he was thinking: "What do I do not to get beaten inside my car."

"He immediately grabs my gun and says, 'You are too much of a pussy to shoot me,'" Wilson told grand jurors. He said Brown grabbed the gun with his right hand, twisted it and "digs it into my hip."

Asked why he felt the need to pull his gun, Wilson told grand jurors he was concerned another punch to his face could "knock me out or worse."

After shots were fired in the vehicle, Brown fled and Wilson gave chase. At some point, Brown turned around to face the officer.

Witness accounts were conflicted about whether Brown walked, stumbled or charged back toward Wilson before he was fatally wounded, McCulloch said. There were also differing accounts of how or whether Brown's hands were raised. His body fell about 153 feet from Wilson's vehicle.

Thousands of people rallied - mostly peacefully - in other U.S. cities on Monday night, and President Barack Obama appealed for calm and understanding, pleading with both protesters and police to show restraint.

"We are a nation built on the rule of law, so we need to accept that this decision was the grand jury's to make," Obama said. He said it was understandable that some Americans would be angered, but echoed Brown's parents in calling for peaceful protests.

About 10 St. Louis-bound flights were diverted or canceled Monday night because of concern about gunfire being aimed into the sky, a Lambert-St. Louis International Airport spokesman said, but the restrictions expired at 3:30 a.m.

The Justice Department is conducting a separate investigation into possible civil rights violations that could result in federal charges, but investigators would need to satisfy a rigorous standard of proof in order to mount a prosecution. The department also has launched a broad probe into the Ferguson Police Department, looking for patterns of discrimination.

Regardless of the outcome of those investigations, Brown's family could also file a wrongful-death lawsuit against Wilson.

The August shooting heightened tensions in the predominantly black suburb that is patrolled by an overwhelmingly white police force. As Brown's body lay for hours in the center of a residential street, an angry crowd of onlookers gathered. Rioting and looting occurred the following night, and police responded with armored vehicles and tear gas.

Ron Johnson, the Missouri State Highway Patrol captain who oversaw Ferguson security during the summer protests, said the community must take some responsibility for the looting that took place Monday night. There were about 25 fires set overnight, and 10 cars burned at a dealership, Ferguson Assistant Fire Chief Steve Fair told local media. A pizza shop, beauty supply store and two auto parts stores were among those burned.

"Those are dreams," Johnson said. "Those are small-business owners, and we've torn those dreams away."