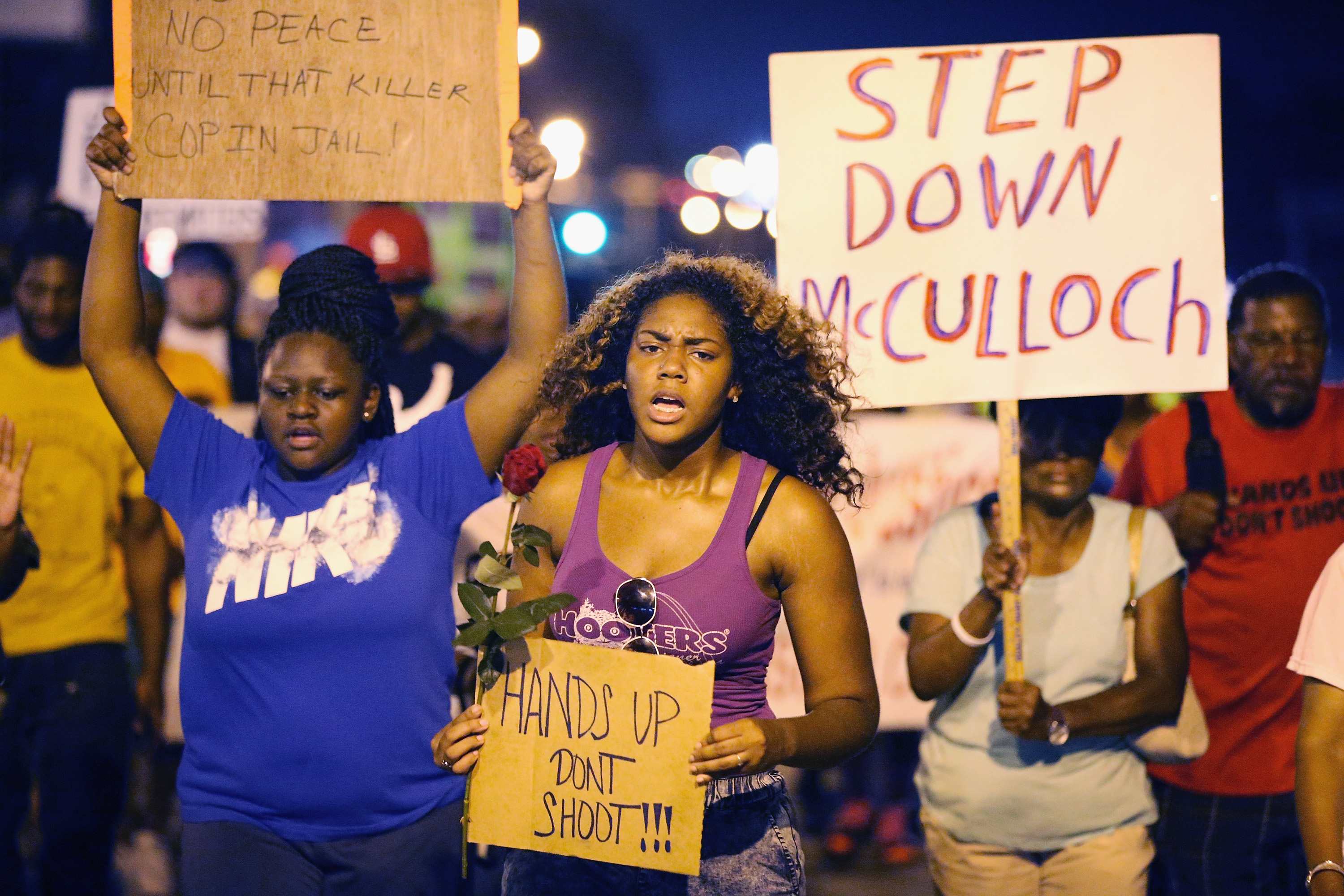 Paul Fox, director of judicial administration for St. Louis County Circuit Court, confirmed the racial and gender makeup of the grand jury on Friday. St. Louis County prosecutor Bob McCulloch has said it will be several weeks before a decision is made on whether to charge Darren Wilson, the Ferguson officer who shot and killed Brown on Aug. 9.

According to the St. Louis Post-Dispatch, the racial makeup of the grand jury is similar to the racial breakdown of St. Louis County, which is about 24 percent black and about 68 percent white.

The ages and hometowns of the jurors weren't released. A judge is expected to consider Monday whether to make that information public.

Conditions calmed this week in Ferguson after nights of sometimes violent unrest stemming from the fatal shooting of a black 18-year-old by a white police officer. But a delicate and crucial question lingers: What happens if the grand jury now considering the case doesn't return a charge against the officer?

The fear among some local residents and officials trying to maintain peace in Ferguson is that failure to charge the officer could stoke new anger among a community profoundly mistrustful of the legal system.

U.S. Sen. Claire McCaskill told The Associated Press she's pushing for federal and local investigations to be completed around the same time so that all evidence in the case can be made public - a step many consider important should prosecutors decide not to charge the officer. Her office said Friday that the Department of Justice hasn't given a timeline for the federal investigation, which centers on whether a civil rights violation occurred when officer Darren Wilson fatally shot the unarmed Brown Aug. 9.

McCaskill, a former prosecutor in Missouri, said she's hopeful the physical evidence in the case - including blood spatter patterns, clothing and shell casings - will provide "incontrovertible facts" about what happened during the shooting. She said whatever local prosecutors decide, it will be important to explain the decision by providing that physical evidence, and that won't be possible if the federal investigation is ongoing.

McCaskill said she urged Attorney General Eric Holder during a meeting earlier this week to speed up what is typically a lengthier federal process.

"What we want to avoid is a decision being made without all the information being available to the public also," McCaskill said, adding that not being able to do so could "create more stress and certainly much more fear that we would be back to worrying about people being able to protest safely."

"Obviously all of us are concerned not just about that this process be fair, but what does this next six months look like?" she said.

Many residents who live in the Ferguson, eager to end the disruptions to their lives caused by protests and police presence, say they fear the community's anger will explode anew if Wilson isn't charged.

"This officer has to be indicted. I'd hate to see what happens if he isn't. The rioting, the looting, man ...," said resident Larry Loveless, 29, as he stopped at the memorial for Brown where he was killed.

Brown's shooting set off more than a week of racial unrest and protests. Those demonstrations have quieted in recent days, and on Thursday Gov. Jay Nixon ordered the Missouri National Guard - which had been called in to try to quell violence in the streets of Ferguson - to being withdrawing from the area.

St. Louis County prosecutors this week convened a grand jury to begin hearing evidence in the case, despite concerns among some in the community - including Brown's parents - that the office would not be impartial because of District Attorney Bob McCulloch's ties to law enforcement. McCulloch's father, mother and other relatives worked for St. Louis police, and his father was killed while responding to a call involving a black suspect. He has said he will not remove himself from the case.

Crump said the family doesn't believe the grand jury was necessary, arguing that the prosecutor had sufficient grounds to charge the officer on his own.

The Department of Justice opened a parallel investigation, sending dozens of FBI agents to Ferguson to question witnesses.

Finishing both investigations simultaneously would be unusual because federal investigators typically work independently of their state counterparts and at their own pace, said Paul Cassell, a former federal judge who is a University of Utah law professor.

"That is one of the advantages of a federal investigation. They tend to have a little more distance from the police officers who are being investigated. That provides some assurance of objectivity," he said.

He said prosecutors must avoid considering the potential reaction - even a violent one - on whether to file charges in any case. He said they must make "a dispassionate judgment uninfluenced by public opinion."

For the parents of Michael Brown, the emotions are still raw.

"My son didn't deserve it. Nobody's child deserves to be treated like that - nobody's," said Leslie McSpadden, the teen's mother.

She and Michael Brown Sr. spent the day planning their son's funeral.

"I'm still dreaming a little bit. But, not getting a phone call for the last few weeks, so it's kind of coming to a sense of I am not going to hear that voice again," said Brown Sr.