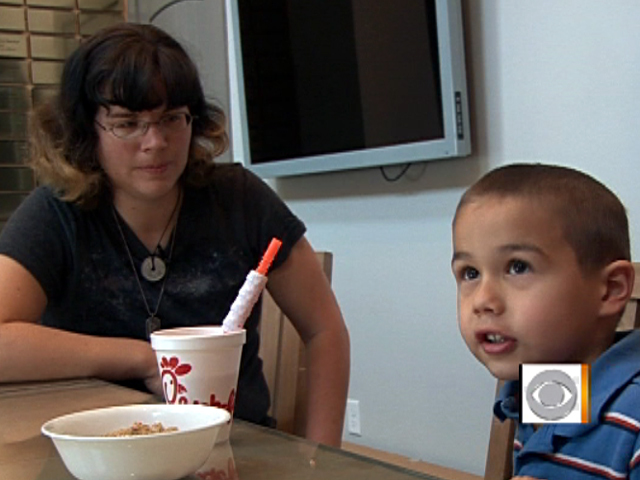 Tens of thousands of troops are leaving military service and entering an often bleak job market. For women with families, it's especially difficult to find work and housing.

CBS News correspondent Michelle Miller traveled to Fayetteville, N.C., to visit with some female veterans who are looking for help to change their lives.

Shawn McLean is one of those veterans. She served in the Army for four years as a water treatment specialist. She told Miller, if she had to do her military service all over again, she would, because she "loved it."

But she's had no luck finding a full-time job since her discharge in 2008.

"I don't think when you get out, they actually point you in the right direction," McLean said. "They give you a bunch of briefings, but they don't sit down (and say,) 'What is your next step?'"

Ruth Donaldson served in the Army for 10 years.

"I went to a place that I thought could give me a head start in life," Donaldson said.

Both McLean and Donaldson had been homeless -- living at a shelter for female veterans near Fort Bragg. It's called The Jubilee House, and was started by former Navy Chaplain Barbara Marshall.

"(When) you're in the military, everything is taken care of for you -- good pay, good housing, all those other kinds of perks," Marshall said. "But when you leave that setting, you've got to start from ground zero."

Donaldson has not been able to find a full-time job since she asked to be discharged to care for her autistic son. That was three years ago.

"It's much harder to have our experience from the military and have it transition over to jobs they find acceptable," Donaldson said. "I was an ammunitions specialist. Who is going to hire that?"

"It must be hard with an autistic son," Miller said. "He has special needs?"

The Veterans Administration estimates there are nearly 68,000 homeless veterans. More than 5,000 are women. To combat the problem, the VA is training many of its 7,000 case managers to deal with issues specific to women.

McLean told Miller she wants to go back to school to be a medical assistant. She said, "Once I get into school, I hope things will start picking up."

With Marshall's help, both Donaldson and McLean have moved into VA-subsidized housing. Donaldson is on her way to getting her degree in computer graphic design and, she hopes, on her way to a paycheck to support her son.

When asked about her schooling, Donaldson said, "I figured that's one way to get out of the minimum-wage jobs and finally create a future that's stable for (my son and for me). He'll know his mom, and he has a place to come home every day after school, and I will be waiting."

Donaldson and McLean are thankful for their temporary home at The Jubilee House, which now has four new families. The women are looking forward to permanent work in the New Year.

The Department of Veterans Affairs has a set a goal of eliminating veteran homelessness by 2015.

For more information about the programs featured in this report, go to these resources: