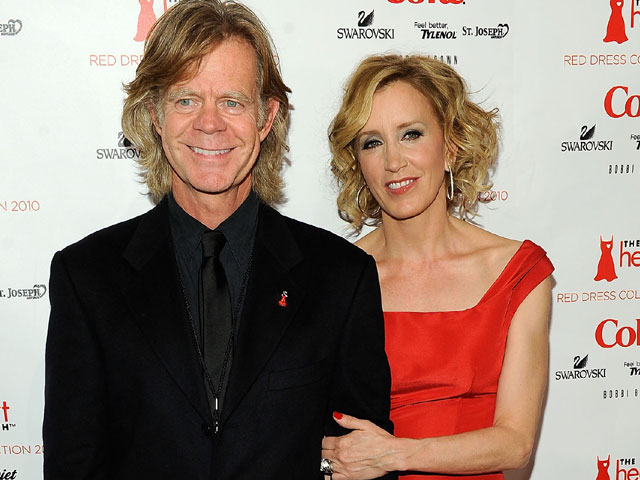 NEW YORK (CBS) Felicity Huffman is an Oscar nominee and one of the stars of ABC's "Desperate Housewives," but she knows a lot about having to share the spotlight.

The actress credits growing up in a big family as where she learned the importance of community and what shaped her sense of personal responsibility.

"I'm one of eight, so I have six older sisters and my mom, who really raised me, and you're very much a part of a community, and community starts at home," she told CBSNews.com. "There's good things and bad things about having siblings, but  what's great about having siblings is that...you learn to work in a group and what does it mean - that, you know, your needs aren't paramount all the time. So I learned it from my family."

It's something she tries to pass along to her own family. She and her husband, actor William H. Macy, are parents to daughters Sofia Grace, 10, and Georgia Grace, 8.

"I think it starts in small ways," she said of teaching her girls to be responsible. "Which is, a little part of a community, the community of the family. Everyone pitches in to make the happy machine of the family work. And you are responsible, as am I. Your responsibilities are less, but yes, you need to clear the table and set the table and make your bed and feed the dog - and that's sort of part of being part of the group."

She added that she emphasizes to her daughters that they shouldn't follow the crowd.

"I feel like when they're this young - at least my idea for the next 10 minutes - is that personal responsibility is about holding on to your core, regardless of what your peers do. If there's a kid in school who's unpopular and people pick on him, I think your personal responsibility is to say, 'Wait a second, I'm not going to go with the group. How do I want to treat this person?'"

But, she stressed, she doesn't see herself as a parenting expert - "I just stumble from one mistake to the next."

Huffman wrote, directed and starred in a short film for Liberty Mutual's Responsibility Project about being Earth conscious, but admits that when it comes to practicing what the film preaches (like turning off lights and shutting off running water), her family could do better.

"Yes, but we're not very good at it!" she exclaimed. "I know we all want to and should make big steps, but when it comes down to those small things - turning off lights, turning off the water, unplugging things - we can very easily, my family in particular, and I'm sure many people out there, you can save five to 10 percent without even feeling it, just being a little more conscious."