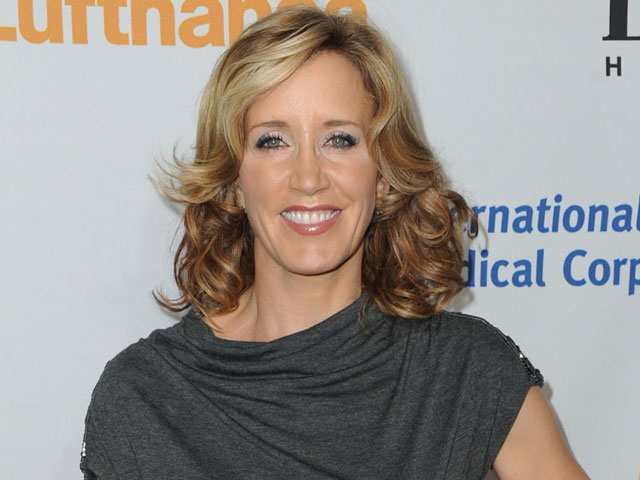 NEW YORK (CBS) Felicity Huffman wants to know what will happen next on "Desperate Housewives" - and she says that's how she knows this season is a good one.

Huffman, who plays Lynette Scavo on the show, says that the series, which is now in its seventh year, is showing no signs of slowing down.

"Usually they're like 'Ooh, seven-year itch.' But this year, as our numbers can attest, it's better than ever," she said. "The writers feel rejuvenated and excited, and when you have happy writers, you have happy actors. Adding Vanessa Williams was a wonderful coup on our part. So we've been having a great time and the scripts reflect it and I think the audience is happy."

The Oscar nominee does know what's in store for the characters, but she's not sharing - "I could tell you, but then I'd have to kill you," she joked.

Huffman also shared that she thought of one of her "Desperate" costars - actress Eva Longoria Parker - when she was asked to direct a short film for Liberty Mutual's Responsibility Project.

"I remembered my friend Eva Longoria, who always says 'Yes!' to life and is always throwing her hat over the fence and then figuring out how to climb it," she said. So Huffman not only agreed to direct and star in the film, but asked if she could write the screenplay as well.

The short film, called "Lesster," is about a young boy who is dressing up as an environment-conscious superhero for his school's Earth Day parade. As his parents get him ready (Huffman plays his mother), they lecture him about respecting the environment, the boy takes the time to turn off lights, air conditioning, televisions and faucets without them noticing.

Writing the story took her about three months, she recalled, because "my scripts kept being bad."

"It's really hard to talk about the environment and being green without either being preachy or boring or scolding - all of which I was," she explained.

It was also her first time directing a movie - and first time calling "action."

Of all three roles she played on the set - writer, director and actress - Huffman said the first two took priority.

"Being the actor is way in the back seat. Because you're looking at it and going 'Aw, that line doesn't work, let's change it. Let's give that line--' so you're kind of the writer and the director. And the actor just sort of limps along behind. You turn to the actor in you and go, 'Just don't mess it up, OK?'"

She said she chose the Earth-friendly storyline for the Responsibility Project because she grew up in Colorado and the environment is "near and dear to my heart."

But when asked if she practiced what the film preaches, she admitted her family (she and husband William H. Macy have two daughters) could do better.

"Yes, but we're not very good at it!" she exclaimed. "I know we all want to and should make big steps, but when it comes down to those small things - turning off lights, turning off the water, unplugging things - we can very easily, my family in particular, and I'm sure many people out there, you can save 5 to 10 percent without even feeling it, just being a little more conscious."

Huffman also revealed that she is friendly will all the women on the "Desperate Housewives" set - "We've had a long, phenomenal journey and we're all pretty close" - and that she's excited for her husband's new Showtime series, "Shameless."

"It's just such a great character," she said of Macy's role as a dysfunctional dad on the show. "At dinner or at breakfast while they're shooting he regales us with the monologues from the next day. It's, 'Listen to what I get to shoot tomorrow,' or at dinner he goes, 'Listen to what I did today.' So we get little snippets of what he gets to act. And I've been to the set a couple of times and it's very exciting and I think it's going to be a great, great series."