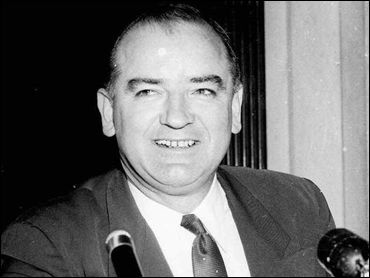 (AP)
Since 1951, South Carolina has had a law on its books requiring anyone looking to overthrow the government to, well, register with the government.

No one had actually registered until February, when news of the law's existence spread on the internet and talk radio. Now State Sen. Larry Martin, a Republican, has introduced legislation to repeal the law, known as the "subversive activities registration act."

"I heard discussion about it as I was driving back home a few weeks ago on the radio, with a reference to it as if we had recently passed it," Martin told Hotsheet. He said there was "somebody suggesting that we had passed this thing just recently in order to go after Tea Party activists, or some foolishness like that."

The form to register as a "subversive agent" in South Carolina can be found here. Interested parties list the "name of subversive organization" as well as the name and address of its "chief agent."

They are then asked to check a box for "yes" or "no" following this question: "Do you or your organization directly or indirectly advocate, advise, teach or practice the duty or necessity of controlling, seizing or overthrowing the government of the United States, the state of South Carolina or any political division thereof?"

If the answer is yes, the person is asked to outline their fundamental beliefs. When he or she completes the form, they are asked to submit it to the South Carolina Secretary of State's Office -- along with a $5 filing fee.

According to Martin, people began registering as "subversive agents" after word of the law became public -- though many have been tongue in cheek. "I think we had Donald Duck in there," he said, laughing. "For five bucks, you can sign up anybody."

The Secretary of State's Office tells Hotsheet there have been 11 registrants overall, among them an atheist group, a liberal law firm and someone claiming to represent "Democratic Party of the United States," which allegedly has the fundamental beliefs of "socialism -- Marx, Englels, Sanders."

One of the submissions is listed as coming from "tea party," with the respondent checking "yes" when asked about overthrowing the government. Asked to outline fundamental beliefs, the respondent wrote "Please see U.S. Constitution 9/17/1787."

Another comes from the "American Citizens for the Extermination of South Carolina." That group claims to believe "the US should use its nuclear arsenal to detach SC from the mainland, use heavy ships to tow the state into the Atlantic and sink it and its political idiots."

Another person who filled out the form, claiming to represent "Libertarian Party," writes that "I personally advocate the conduct and control of the U.S. federal govt. by Ron Paul and of S. Carolina by anyone who can keep his pants on and refrain from visiting South American bimbos." (Those last few words, of course, are a reference to South Carolina Gov. Mark Sanford.)

The subversive activities registration act was passed, the Associated Press reports, to deter communists -- the idea being that it would provide a path for prosecution of people plotting to overthrow the government. (Failure to file is punishable by a fine of up to $25,000 and up to 10 years in jail.) Martin said he had one constituent call and tell him he thought the law might be worth keeping.

"I readily recognize when it had been passed and what the purpose of it was back in the 1950s," he said. "But I don't think Osama bin Laden is going to register. It's outlived its usefulness."

Martin's proposal goes before a subcommittee Thursday morning, and the law could be off the books within weeks. He said repeal was important in light of the bad publicity his state has garnered over the past year.

"Between the governor going to Argentina and all that's gone on with that, and then a congressman drawing attention to himself during the president's speech last September, and then our lieutenant governor was recently in the news for some comments he made, I just felt like, well, 'somebody needs to present a bill to take this off the table,'" he said.