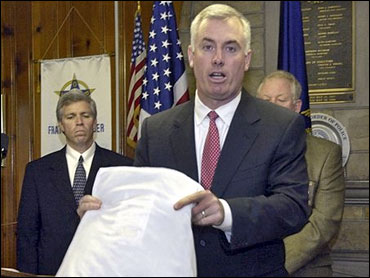 Federal prosecutors are investigating whether a maker of bulletproof vests endangered lives, including President Bush's, by concealing potentially deadly flaws in the body armor sold to the government and police agencies.

A whistle-blower from the company, Second Chance Body Armor Inc., of Central Lake, Mich., testified this month that the Secret Service tested and bought some of the defective vests for the president and first lady Laura Bush.

The Pentagon also obtained the same armor for elite troops who guard generals, according to transcripts obtained by The Associated Press.

Many sales occurred well after Second Chance had been alerted that the Japanese-made Zylon synthetic material in the vests was degrading faster than expected from heat, light and moisture exposure, allowing bullets to potentially penetrate the armor, according to the whistle-blower's testimony and other company documents.

Prosecutors have gathered documents showing that Second Chance was alerted as early as 1998 by the Japanese material maker, Toyobo Co., that Zylon had trouble maintaining its protective properties.

By 2001, Second Chance's research chief, Aaron Westrick, was pleading unsuccessfully with his company's president to replace the vests after his own tests showed them degrading, the memos show.

"Lives and our credibility are at stake," Westrick wrote then-Second Chance president Richard Davis in a Dec. 18, 2001, memo. "We will only prevail if we do the right things and not hesitate. This issue should not be hidden for obvious safety issues and because of future litigation."

Westrick urged Davis to "immediately notify our customers of the degradation problems," let those with pending orders cancel them and cease all executive bonuses to save money so the company could pay for a replacement initiative, the memo shows.

But Second Chance customers were not alerted to the problems until September 2003 — after a California police officer was shot to death wearing the vest and a Pennsylvania officer was seriously wounded.

In the interim, the Secret Service paid $53,000 in 2002 to Second Chance for body armor, enough to equip the president and the security detail that protects him and other VIPs, federal procurement records show.

Legal professionals and government officials familiar with the inquiry confirmed Westrick's account about the Secret Service and Bush. They said the criminal investigation is in addition to a Justice Department lawsuit filed last summer that accuses Second Chance and Toyobo of fraud. The officials spoke only on condition of anonymity, citing grand jury secrecy.

Robert H. Skilton, Second Chance's lawyer, did not return calls to his office last week. Some of the company's non-Zylon assets have been sold and others are in bankruptcy.

Westrick's lawyer, Stephen M. Kohn, said Sunday his that client is cooperating with the criminal investigation.

"Greed prevailed over the safety of police, soldiers and even the president of the United States," Kohn said. "The officials who personally profited from selling the defective vests to law enforcement must be held accountable to the fullest extend of the criminal code."

Throughout 2001 and 2002, agencies from the Pentagon to local police bought vests from Second Chance, records show. The company now says more than 100,000 Zylon vests it sold are in question, and the government said it bought at least 40,000.

In summer 2002, company executives prepared a memo for their board of directors recommending two stark options.

"Solution 1: We continue to operate as though nothing is wrong until one of our customers is killed or wounded or Germany, Japan, Dupont or some other entity exposes the Zylon problem," the memo said.

Under a category "Downfalls" for that option, the memo warned an officer wearing one of the vests might be killed. "In the eyes of law enforcement, we will either be stupid for not knowing or greedy and uncaring for knowing and not doing anything about it," the memo said.

The second option recommended the company publish an ad "denouncing" the vests and "decline to make them" unless customers knew of the problem and still wanted them.

While it waited until fall 2003 to alert buyers, Second Chance arranged in the interim for Toyobo to begin paying it refunds in 2002 for the Zylon problems, promising to use the money to fix vests already sold in the United States, according to documents in Second Chance's bankruptcy case.

Toyobo told the bankruptcy court that Second Chance took the money but "failed to implement the corrective actions."

"It is apparent that Toyobo was duped by Second Chance," Kent Jarrell, a U.S. spokesman for Toyobo, said Sunday. "We were shocked by the level of Second Chance's deception when their behavior was finally uncovered because of documents that surfaced in litigation and through investigation."

The Justice Department's suit this summer accused both Second Chance and Toyobo of allowing vests to be sold to local, state and federal police even though they knew their ability to stop bullets was overstated.

But that suit, along with others filed by states, made no mention of a connection to the Secret Service and Bush. Westrick discussed that connection in a deposition earlier this month provided to investigators.

"The president had Zylon Ultima armor and his wife had it, if I recollect, and they took a look at it ... I believe it was the Secret Service put the armor through some special tests and went with it, bought it," Westrick testified in a Sept. 9 transcript obtained by The Associated Press.

Westrick said that while the vest had passed initial Secret Service testing, he warned his company that Zylon would soon degrade and allow bullets to pierce the armor. "I said it would be a problem," he testified.

Westrick was told Bush wore Zylon-protection during the 2001 inauguration and during a 2002 event with police that his boss attended, according to legal professionals familiar with the case.

The former research director-turned whistle-blower testified he provided to Central Command several Zylon Ultima vests but warned he feared they were defective.

"Second Chance supplied them, but I also told them I thought the armor was problematic," Westrick said. " ... I thought it would degrade. My research showed that it degraded."