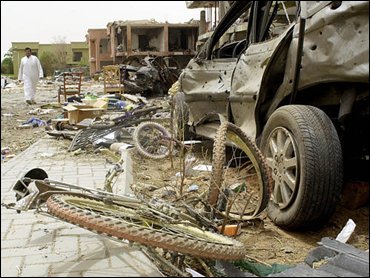 A six-member FBI team is expected to arrive in Saudi Arabia Thursday to assist — but not lead — the investigation into the terror attacks that killed 34 people this week.

FBI officials say the team was kept small to prevent the perception that U.S. law enforcers are taking over. The team will determine what other personnel or resources need to be brought in.

"Saudi Arabia is a sovereign country and this is their investigation," and embassy official said on condition of anonymity. "Whatever investigation is conducted by the FBI, I'm sure the Saudis will be involved in it."

Some U.S analysts worry the Saudis will limit the Americans' access to suspects and evidence, as they did after the 1996 terrorist attack on a U.S. military housing complex.

But some officials say the relationship between Saudi police and U.S. investigators has since gotten better. Saudi officials have been stung by criticism that they did too little to combat militancy ahead of the Sept. 11 attacks, in which most of the hijackers were Saudis.

In one possible sign of a new approach, Saudi officials have dealt openly with charges they did not increase security enough in light of warnings of an impending strike.

Intelligence officials had feared an attack was coming, and U.S. Ambassador Robert Jordan told CBS News Wednesday he had tried and failed before Monday to get the Saudis to tighten security around Riyadh compounds where Americans live.

The Saudi ambassador to the United States, Prince Bandar bin Sultan, acknowledged the request in several U.S. television interviews. But he suggested that Jordan sought security for only one compound — and that Saudi security successfully protected foreigners there.

Foreign Minister Prince Saud al-Faisal told reporters he had "not heard of" the U.S. requests for more security, but admitted there were security lapses, saying Saudis should "look within themselves and see whether we have done enough to preserve the security of our nation."

Monday night's bombings targeted three residential compounds where expatriate executives and professionals live. Besides the eight Americans, those killed Monday were seven Saudis, three Filipinos, two Jordanians, and one each from Australia, Britain, Ireland, Lebanon and Switzerland, according to the Interior Ministry. Nearly 200 were injured.

Saud said the attacks, blamed on Osama bin Laden's al Qaeda terror network, were designed to drive away foreigners, but he insisted Saudi Arabia is safer now than before the car bombings.

The Saudi government has said the attacks are connected to 19 al Qaeda operatives who engaged in a gunfight with police in Riyadh on May 6 and escaped, though one later surrendered. Interior Minister Prince Nayef said the 19 are believed to take orders directly from bin Laden.

Saud said 15 terrorists took part in this week's attacks; at least nine were killed, but some are presumed to have gotten away.

Along with reassuring foreign business, the kingdom's leadership is eager to see that the attacks do not strain ties with Washington, where some blame the kingdom's strict version of Islam for breeding the likes of Saudi-born bin Laden and the Sept. 11 hijackers.

Saudi newspapers, which are privately owned and government guided, have carried editorials using unusually harsh language to lash out at extremists who use religion to rally youths to carry out suicide attacks and who impose social rules that make the kingdom one of the harshest countries to live in.

Saudi Arabia's top cleric, Sheik Abdul Aziz bin Abdullah Al al-Sheik, was quoted in the Saudi daily Okaz on Wednesday as saying that while the perpetrators might claim to be acting in the name of Islam, Islam has nothing to do with "them and their disgraceful and destructive deeds."

The attacks came as the United States was withdrawing most of its 5,000 troops from Saudi Arabia, a presence bin Laden has used as a pretext for attacks.

"Saudi Arabia must deal with the fact it has terrorists inside its own country," White House spokesman Ari Fleischer said. "Their presence is as much a threat to Saudi Arabia as it is to Americans."

But Fleischer insisted the U.S.-Saudi relationship is not being reassessed as a result.

"The one thing the terrorists want more than anything else is to be able to attack the United States, to attack others in the region and force us into changes in our policies," he said. "That will not happen."

Still, some foreigners were going ahead with plans to leave.

"I'm terrified and I'm really scared. I think we need a break from all of this," said Tanya Scott, a 36-year-old Australian flight attendant.

The U.S. Embassy was closed for security reasons Wednesday and the State Department ordered home nonessential diplomats and family members.

In the latest anti-Westerner attacks, bombers on a motorcycle set off a series of explosions Thursday at six U.S.-based Shell gas stations in southern Karachi, police said. There were no injuries.

Over the course of three hours, two men on a motorcycle went from one Shell station to the next, got gas and placed the home-made devices in a garbage can, police spokesman Malik Sheikh said.