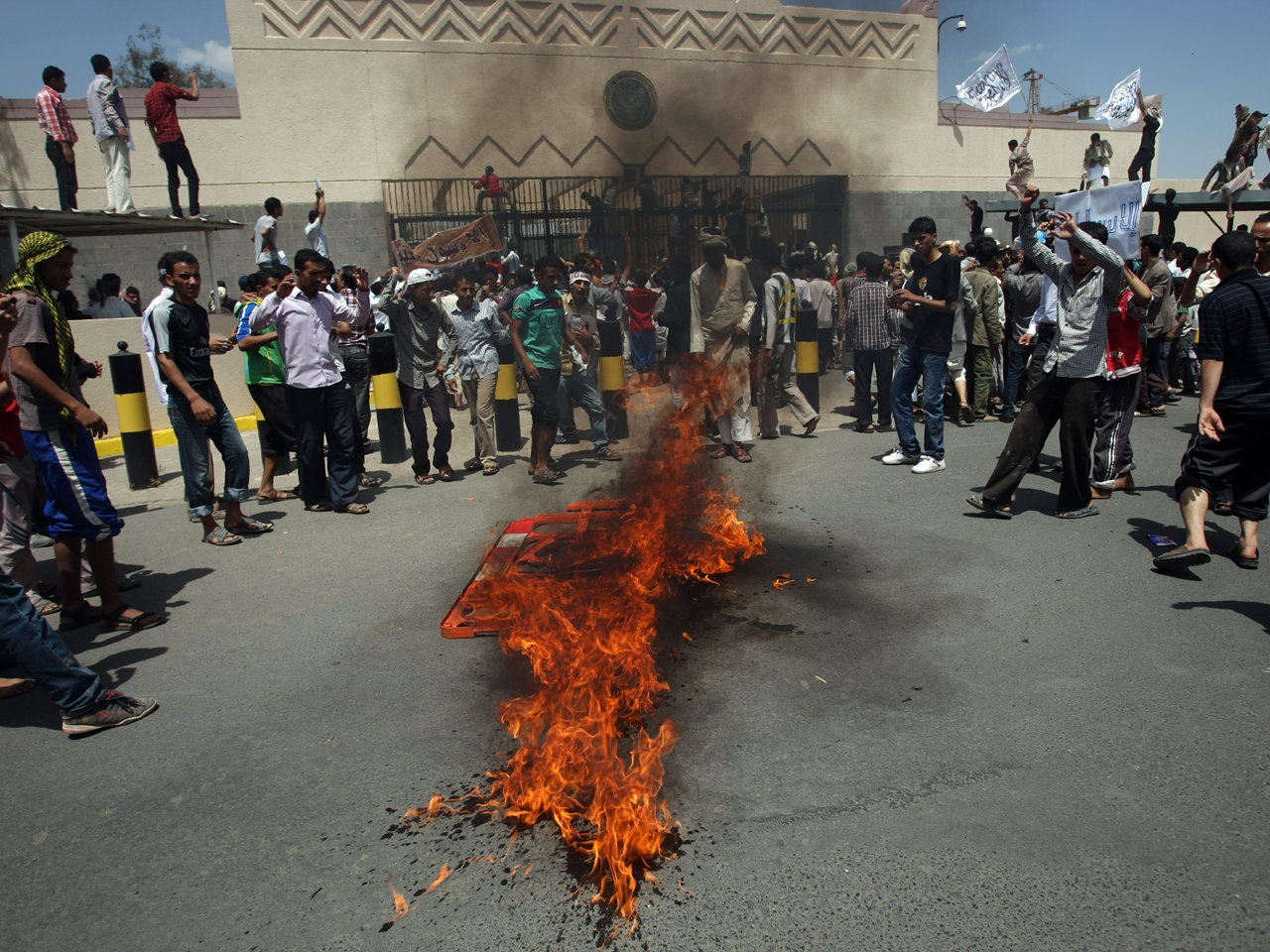 (CBS News) LONDON - There were clashes Thursday between anti-U.S. protesters and Yemeni police at the U.S. Embassy in Sanaa. CBS News sources say a large group of protesters reached the walled compound, but failed to breach any of the buildings inside the compound as police fired warning shots to try to disperse the crowd.

All U.S. embassies and diplomatic posts were ordered to increase security measures Wednesday by President Obama, following the deadly attack on the U.S. consulate in Benghazi, Libya, on Tuesday.

The number of protesters in Sanaa was estimated between 3,000 and 4,000, according to sources speaking to CBS News partner network Sky News.

Yemen is the home of al Qaeda in the Arabian Peninsula (AQAP), one of the most active and dangerous terror groups linked to the central al Qaeda organization. The U.S. military and intelligence agencies have worked alongside Yemeni officials to counter the Islamic extremist element inside the country. Many drone strikes have been carried out, allegedly by the U.S., in the last year targeting militants in Yemen.

There has been mounting concern among Western security services that AQAP and the al Qaeda franchise in north Africa, al Qaeda in the Islamic Maghreb (AQIM), have been sharing resources.

The clashes at the embassy came as protests continued Thursday outside the U.S. Embassy in Cairo, Egypt - the first location where Muslim anger apparently aimed at a video ridiculing the Islamic prophet Muhammad manifested itself on Tuesday.

CBS News correspondent Holly Williams reports the clashes in Cairo again became violent on Wednesday, as protesters tried to push toward the embassy compound walls. Egyptian riot police used shields and batons to push them back from walls, but resorted to tear gas when the protesters continued advancing.

The crowd eventually thinned out, but Williams says a small group of protesters remained in front of the embassy all night.

Thursday morning there were sporadic clashes again with riot police, who were out in force, possibly expecting bigger crowds later in day.

Williams reports that the clashes in Cairo have caused some tension with the U.S. for Egypt's fledgling democracy, led by President Mohamed Morsi.

Morsi received a call from President Obama Wednesday night, during which Mr. Obama, "underscored the importance of Egypt following through on its commitment to cooperate with the United States in securing U.S. diplomatic facilities and personnel," according to the White House.

That statement from the White House implies the Obama administration was critical of the Egyptian authorities' response to the demonstrations on Tuesday, when protesters breached the embassy compound and managed to tear down and burn the U.S. flag.

CBS News' Alex Ortiz reports that, since Morsi won the recent presidential elections in Egypt with huge support from conservative Muslims, security around the U.S. Embassy in Cairo had been visibly reduced.

Williams says Morsi is now in a difficult position. On the one hand Egypt has been a strong ally to the U.S. in the Middle East, and while those relations have cooled slightly since Morsi and the Muslim Brotherhood rose to power, the ties are still important. The protests at the embassy won't do the relationship any good, and that explains the now heavy presence of riot police.

On the on other hand, however, Morsi knows that his base of support is still with the nation's conservative Muslims, and that explains his government's strong condemnation of the mysterious anti-Muslim video which appeared on Youtube his summer, and which has been the catalyst for the protests in Egypt and elsewhere.

Meanwhile, there was reportedly a warning Thursday from an Iraqi militant group linked to the powerful anti-U.S. Shiite cleric Muqtada al-Sadr, that U.S. interests in Iraq were "in danger" over the movie. The Asaib al-Haq militia, a Shiite group based in Iraq's south, had already urged Iraq's government to ban the video and hold the U.S. responsible for it's production - though it remains unclear whether the movie - if it exists as a full-length film - was even produced in the United States.

While there has been nothing to suggest the U.S. government or any individuals connected to it had anything to do with the production of the vitriolic 15-minute clip on Youtube, which is allegedly a promotion clip for a bigger movie called the "Innocence of Muslims," extremist Muslim groups around the world have been quick to use it as propaganda - suggesting it is the product of what many jihadists believe is an American war on Islam.