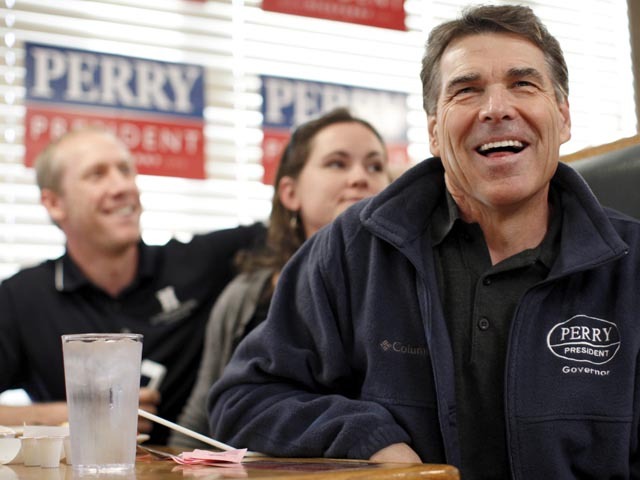 A federal judge on Friday ruled against a lawsuit brought by Texas Gov. Rick Perry that challenged Virginia's ballot access laws. If the ruling stands, it will be a two-way race between Mitt Romney and Ron Paul for Virginia's delegates.

Judge John Gibney of the U.S. District Court for the Eastern District of Virginia said that Perry, as well as Newt Gingrich, Jon Huntsman, and Rick Santorum may not appear

Gibney wrote that the candidates simply waited too long to request an injunction.

"The Commonwealth is far along in the electoral process," he wrote. "The primary election is so close that the plaintiffs cannot gather the requisite signatures to get on the ballot."

"Had the plaintiffs filed a timely suit, the Court would likely have granted preliminary relief," he added.

Perry's lead counsel, Joe Nixon, was critical of the outcome. "We are disappointed with this result that disenfranchises Virginia voters," he wrote in a statement. "The judge confirmed that the statute is unconstitutional, but did not remedy that situation.

Perry said his campaign has not yet decided whether it will appeal the decision.

Asked on Fox News Radio how he could continue without being allowed on the state's ballot, he said: "You just press on. The fact, is you don't think about 'woulda, shoulda coulda.' You keep the target that's in your sights. And it's very clear that it's South Carolina at the moment."

Gingrich, appearing on CNN, acknowledged the ruling puts more pressure on him. To beat Romney, he said, he would have to win South Carolina and Florida and then win extra states on Super Tuesday.

Virginia Attorney General Ken Cuccinelli applauded the decision even though he initially announced his intent to file emergency legislation to change the state's balloting law after Perry sued. He reversed the decision just a day later, although his statement on the ruling suggests he may be open to changing the law in the future.

"I am pleased that the district court is allowing Virginia's orderly election process to move forward. The ruling today dealt only with the request for a preliminary injunction. The litigation is ongoing, and therefore, I will have no further comment," he said in response to the decision.

Perry was the first to file the suit, on Dec. 27, arguing that the requirements -- 10,000 signatures from across the state -- were too onerous, and that his supporter's legal rights were being violated if he was not placed on the ballot. The other candidates, who also failed to turn in the required signatures, joined the suit on Jan. 4.

Gibney had given the candidates reason to hope when he ordered the state electoral boards to delay mailing absentee ballots last week.

Paul's campaign welcomed the decision, saying it echoes their contention that the race amounts to a two-man campaign between Paul and Romney.

"Nothing new was learned here today, as the Virginia ruling merely confirms the suspicions of what many people feel about the viability of Perry, Gingrich, Huntsman and Santorum. This is their crystallizing moment," said Jesse Benton, Paul's national campaign chairman.

Santorum, however, vowed not to let the ruling deter his efforts going forward. "Obviously disappointed, but one state is not going to make or break this election," he said. "So we're just going to keep working on and hopefully, we'll do well enough here [in South Carolina] and in other places to make Virginia just a little bump in the road."